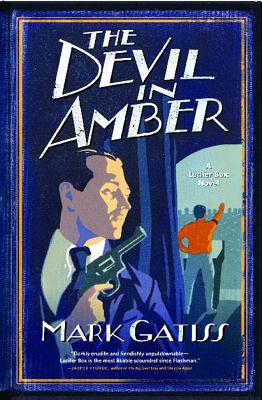 The Devil in Amber

The fabulous Lucifer Box returns for another round of spirited, pun-heavy sleuthing in this devilishly decadent sequel to the acclaimed The Vesuvius Club.

Lucifer Box -- portraitist, dandy and terribly good secret agent -- is feeling his age. He's also more than a little anxious about an ambitious younger agent, Percy Flarge, who's snapping at his heels. Assigned to observe the activities of fascist leader Olympus Mons and his fanatical followers, or "Amber Shirts," in F.A.U.S.T. -- The Fascist Anglo-United States Trinity (an acronym so tortuous it can only be sinister) -- in snowbound 1920s New York, Box finds himself framed for a vicious, mysterious murder.

Using all of his native cunning, Box escapes aboard a vessel bound for England armed with only a Broadway midget's suitcase and a string of unanswered questions: What lies hidden in the bleak Norfolk convent of St. Bede? What is "the lamb" that Olympus Mons searches for in his bid for world domination? And what has all this to do with a medieval prayer intended to summon the Devil himself?

From the glittering sophistication of Art Deco Manhattan to the eerie Norfolk coast and the snowcapped peaks of Switzerland, The Devil in Amber takes us on a thrilling, delicious ride that pits Lucifer Box against the most lethal adversary of his career: the Prince of Darkness himself.

Praise For The Devil in Amber: A Lucifer Box Novel…

"Darkly erudite and fiendishly unputdownable -- Lucifer Box is the most likable scoundrel since Flashman."

-- Jasper Fforde, author of The Big Over Easy and The Eyre Affair

Mark Gatiss writes for the multiaward-winning British television comedy The League of Gentlemen, on which he portrays a debt collector, a cursed veterinarian, a dog cinema owner who has recently branched out into VHS and DVD rentals, and a Knight Rider fan, among many other characters. He also stars in the feature film The League of Gentlemen's Apocalypse and has written episodes for the rejuvenated Doctor Who television series. He lives in a laboratory with a stuffed cat.
Loading...
or support indie stores by buying on