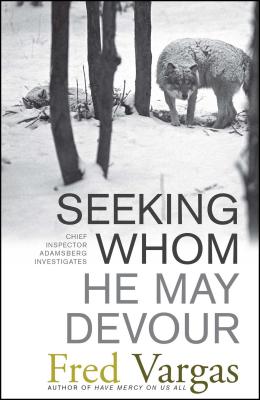 Seeking Whom He May Devour (Chief Inspector Adamsberg Mysteries)

The second book by a major international mystery writer: this exciting and careful whodunit is well-executed, page turning crime fiction (Publishers Weekly). A small mountain community in the French Alps is roused to terror when they awaken each morning to find yet another of their sheep with its throat torn out. One of the villagers thinks it might be a werewolf, and when she's found killed in the same manner, people begin to wonder if she might have been right. Suspicion falls on Massart, a loner living on the edge of town. The murdered woman's adopted son, one of her shepherds, and her new friend Camille decide to pursue Massart, who has conveniently disappeared. Their ineptness for the task soon becomes painfully obvious, and they summon Commissaire Adamsberg from the city to bring his exceptional powers of intuition to bear on layer upon layer of buried hatred and secrets. France's queen of crime writing pits the maverick genius of Commissaire Jean-Baptiste Adamsberg against ancient, primal fears in a novel that establishes Vargas as one of the most unusual voices in European crime fiction (The Sunday Times London]).

Praise For Seeking Whom He May Devour (Chief Inspector Adamsberg Mysteries)…

"Fred Vargas has everything: complex and surprising plots, good pace, various and eccentric characters, a sense of place and history, individualized settings, wit and style."

"Slick, creepy and full of engagingly odd characters, this thriller is a class act."