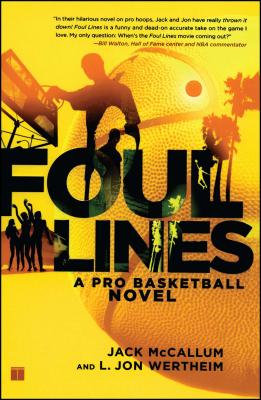 From two senior Sports Illustrated writers comes an explosive, fast-paced satire that will do for today's NBA what North Dallas Forty did for the NFL a generation ago.

Just months from his Yale graduation, street-smart whiz kid Jamal Kelly leaves school to take a once-in-a-lifetime opportunity to join the front office of the Los Angeles Lasers. Once on the West Coast, Jamal gets a quick introduction to a subculture awash in big egos and fast cars, as well as an introduction to the charms of the team's new hard-charging beat writer, Jilly Forrester.

In the spirit of Primary Colors and The Devil Wears Prada, Foul Lines peels back the curtain on the trappings of big-time professional basketball. No other sport encapsulates so many cultural hot-button topics, and Foul Lines at once exposes and lampoons this parallel universe.

"In their hilarious novel on pro hoops, Jack and Jon have really thrown it down! Foul Lines is a funny and dead-on accurate take on the game I love. My only question: When's the Foul Lines movie coming out?" -- Bill Walton, Hall of Fame center and NBA commentator

"In my twenty-seven years writing sports, how many times have I said, 'You can't make this stuff up?' Well, whatever my Sports Illustrated colleagues Jack and Jon made up in Foul Lines, and whatever they got from real life, it comes out fast-paced, funny, and fodder for a film. Even David Stern will have to laugh, I think." -- Rick Reilly, ten-time National Sportswriter of the Year and author of Who's Your Caddy?, Missing Links, and Slo Mo!

"Fun and, at times, hysterically funny...an authentic insight into the world of professional basketball by two writers who have been there on the front lines. One would be tempted to call it a satire if it didn't ring so true." -- Angelo Pizzo, scriptwriter, Hoosiers

Jack Mccallum has been at Sports Illustrated since 1981 and the chief NBA writer since 1985. His work has appeared in the Best American Sports Writing Anthology, and in 2004 he won the Basketball Hall of Fame's Curt Gowdy Media Award for outstanding writing. He is the author of Unfinished Business: On and Off the Court with the 1990-91 Boston Celtics and coauthor of Foul Lines: A Pro Basketball Novel. He lives in Bethlehem, Pennsylvania.

L. Jon Wertheim is the executive editor of Sports Illustrated, a sports television commentator for various networks, and author of nine previous books including New York Times bestsellers Scorecasting and You Can’t Make This Up. He lives in New York City.
Loading...
or support indie stores by buying on