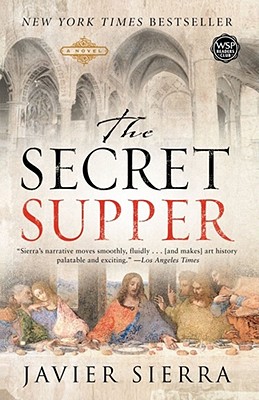 Milan, 1497: Leonardo da Vinci is completing his masterpiece, The Last Supper. Pope Alexander VI is determined to execute him after realizing that the painting contains clues to a baffling -- and blasphemous -- message, which he is determined to decode. The Holy Grail and the Eucharistic Bread are missing, there is no meat on the table and, shockingly, the apostles are portraits of well-known heretics -- none of them depicted with halos. And why has the artist painted himself into the scene with his back turned toward Jesus? The clues to Leonardo's greatest puzzle are right before your eyes....

Praise For The Secret Supper: A Novel…

"Offers a new way of interpreting The Last Supper...[and] a fresh contribution to the da Vinci industry." -- Publishers Weekly

"A most satisfying entertainment....The monastic life has not been depicted as vividly by any novelist since Umberto Eco's bestselling Name of the Rose." -- Daily News (New York)

Javier Sierra, whose works have been translated into forty languages, is the author of The Lost Angel, The Lady in Blue, and the New York Times bestselling novel The Secret Supper. One of the most accomplished authors on the Spanish literary scene, Sierra studied journalism at the Complutense University of Madrid. El Maestro del Prado spent a year on the bestseller list in Spain, gaining the admiration of art experts, aficionados, and critics. A native of Teruel, Spain, he currently lives in Madrid with his wife and two children.
Loading...
or support indie stores by buying on