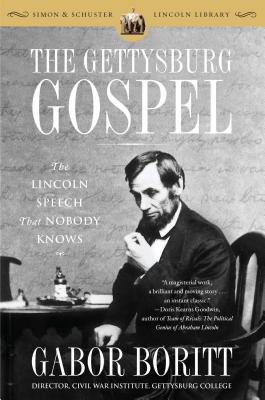 The Lincoln Speech That Nobody Knows

The words Abraham Lincoln spoke at the dedication of the Soldiers' National Cemetery at Gettysburg comprise perhaps the most famous speech in history. Many books have been written about the Gettysburg Address and yet, as Lincoln scholar Gabor Boritt shows, there is much that we don't know about the speech. In The Gettysburg Gospel he tears away a century of myths, lies, and legends to give us a clear understanding of the greatest American's greatest speech.

In the aftermath of the bloodiest battle ever fought in North America, the little town of Gettysburg was overwhelmed. This was where Lincoln had to come to explain why the horror of war must continue. Boritt shows how Lincoln responded to the politics of the time, as well as how and when he wrote the various versions of his remarks. Few people initially recognized the importance of the speech, but over the years it would grow into American scripture, acquiring new and broader meanings.

Based on years of scholarship as well as a deep understanding of Lincoln and of Gettysburg itself, The Gettysburg Gospel is an indispensable book for anyone interested in the Gettysburg Address, Abraham Lincoln, the Civil War, or American history

Praise For The Gettysburg Gospel: The Lincoln Speech That Nobody Knows…

Gabor Boritt is the Robert Fluhrer Professor of Civil War Studies and Director of the Civil War Institute at Gettysburg College. Born in World War II Hungary, he participated as a teenager in the 1956 revolution against the Soviet Union. He escaped to the United States, where he received his higher education and became one of the finest Lincoln scholars. His life story is soon to be the subject of a feature-length documentary film. He is the author, coauthor, or editor of sixteen books about Lincoln and the Civil War. Boritt and his wife live on a farm near the Gettysburg battlefield, where they have raised their three sons.
Loading...
or
Not Currently Available for Direct Purchase