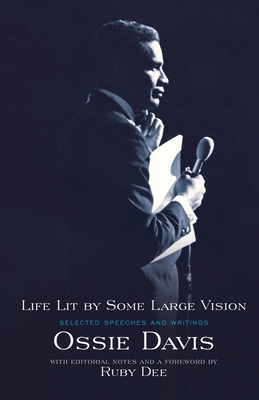 Life Lit by Some Large Vision

Star actor of stage, film, and television, civil rights activist, screenwriter, and director, Ossie Davis was among the most beloved and respected men in Hollywood and American society as a whole, whose brilliant oratory style was among his most inspiring and celebrated gifts—and all of his written essays, tributes, letters, and more have been collected for this book.

This book represents the best of the scores of speeches and talks, written and delivered by the great Ossie Davis. While the sound of his voice will be missed in the reading, his unique gift for expressing himself, articulating his thoughts and his visions are present on every page of this moving collection.

Davis had intended to assemble these disparate pieces long before his passing in the spring of 2005. His wife and his family have followed-up and delivered to us the text of his speeches, essays, tributes and eulogies, letters, and the brilliant monologue that was "The Benediction" from his groundbreaking play, first produced in 1961, "Purlie Victorious."

In the end, this is a book that will resonate from Hollywood to the heartlands across the country as a document of one man's wisdom and generosity, and a legacy that enriches all of us.

Praise For Life Lit by Some Large Vision: Selected Speeches and Writings…

"Ruby Dee's marvelous collection of speeches and writings captures the dignity, eloquence, and passion of Ossie Davis, who blessed us not only with great acting, but with a lifetime of fighting injustice. Life Lit by Some Large Vision will inspire everyone who wants to make a better world."

"Ossie Davis is an authentic American hero. Through the pages of this book, I hear his rich, deep, melodious voice commanding us to continue to live, to learn, and to love."

"Ossie Davis was the greatest artist/activist since the great Paul Robeson. Only Ruby Dee and Harry Belafonte today can be mentioned in the same breath! His courageous words are even more precious now that his life is our legacy!" -- Cornel West, author of Democracy Matters

"This lovely and inspiring book is a final love letter from a devoted wife to an adored husband. It is also a great gift to all of us who continue to learn from their shining example of what it means to be fully, passionately, engaged in all that life has to offer. As we read his words, and hers, we are acutely aware that we are in the presence of greatness."

"Ruby Dee produces for us the voice of her beloved, bringing an uncompromising truth, reminding us of the sound of a black man, bringing us, as he said, the 'scent of freedom.'"

Ossie Davis appeared in numerous Broadway and Hollywood productions, including I'm Not Rappaport, The Defenders, The Stand, Jungle Fever, Evening Shade, Do the Right Thing, and The Client. He was also the author of several plays, teleplays, and children's books. He passed away in February 2005, still active in his work at the age of eighty-seven.

Ruby Dee, collaborator to this provocative collection, has enjoyed an illustrious career on stage and in television and film, and she is also an award-winning author. She and Ossie Davis were married for fifty-six years. They have three children and seven grandchildren.
Loading...
or support indie stores by buying on