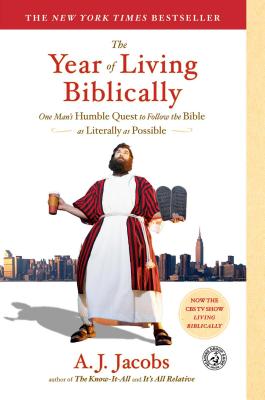 "Impressive and often tremendously amusing.... The author's determination despite constant complications from his modern secular life (wife, job, family, NYC) underscores both the absurdity of his plight and its profundity. While debunking biblical literalism -- with dinner party-ready scriptural quotes -- Jacobs simultaneously finds his spirituality renewed. ...A biblical travelogue -- and far funnier than your standard King James."–Kirkus Reviews

A.J. Jacobs is the author of Thanks a Thousand, It’s All Relative, Drop Dead Healthy, and the New York Times bestsellers The Know-It-All, The Year of Living Biblically, and My Life as an Experiment. He is a contributor to NPR, and has written for The New York Times, The Washington Post, and Entertainment Weekly. He lives in New York City with his wife and kids. Visit him at AJJacobs.com and follow him on Twitter @ajjacobs.
Loading...
or support indie stores by buying on