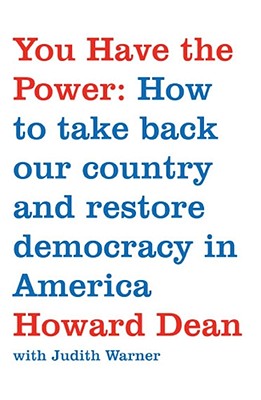 You Have the Power (Paperback)

How to Take Back Our Country and Restore Democracy in America

If you are worried about the way America is being governed and want to reclaim the country you know and love, now is the time to take it back. Governor Howard Dean argues that you have the power to change the future course of America.

You Have the Power is an energetic and detailed guide to restoring American democracy. It exposes the radical extremism of today's "mainstream" Republicans and shows Democrats how to be Democrats again. By reigniting hope, by tapping into the energy and ideals of the American people, Dean writes, the Democrats can restore America's strength and standing at home and abroad.

Drawing on his experience in the 2004 presidential election and the hope and inspiration of the people he met on the campaign trail, Dean shows how real people -- ordinary Americans like himself -- can come together to take their party, the political process, and their country back.

Governor Howard Dean is a physician who previously shared a medical practice with his wife, Dr. Judith Steinberg. He became governor of Vermont in 1991 and served until 2003. He campaigned for the Democratic nomination in the 2004 presidential election and served as honorary chairman of Democracy for America, an organization dedicated to building a grassroots network for the Democratic Party. He is currently the chair of the Democratic National Committee.

Judith Warner, author of Perfect Madness: Motherhood in the Age of Anxiety, lives in Washington, D.C., with her husband and two daughters.
or
Not Currently Available for Direct Purchase
Copyright © 2020 American Booksellers Association