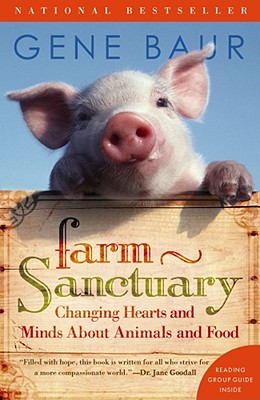 Changing Hearts and Minds About Animals and Food

Leading animal rights activist Gene Baur examines the real cost of the meat on our plates -- for both humans and animals alike -- in this provocative and thorough examination of the modern farm industry.

Many people picture cows, sheep, pigs, and chickens as friendly creatures who live happily within the confines of a peaceful family farm, arriving as food for humans only at the end of their sun-drenched lives. That's what Gene Baur had been told -- but when he first visited a stockyard he realized that this rosy depiction couldn't be more inaccurate.

Amid the stench, noise, and filth, his attention was drawn in particular to one sheep who had been cast aside for dead. But as Baur walked by, the sheep raised her head and looked right at him. She was still alive, and the one thing Baur knew for sure that day was that he had to get her to safety. Hilda, as she was later named, was nursed back to health and soon became the first resident of Farm Sanctuary -- an organization dedicated to the rescue, care, and protection of farm animals.

The truth is that farm production does not depend on the family farmer with a small herd of animals but instead resembles a large, assembly-line factory. Animals raised for human consumption are confined for the entirety of their lives and often live without companionship, fresh air, or even adequate food and water.Viewed as production units rather than living beings with feelings, ten billion farm animals are exploited specifically for food in the United States every year.

In Farm Sanctuary, Baur provides a thoughtprovoking investigation of the ethical questions involved in the production of beef, poultry, pork, milk,and eggs -- and what each of us can do to stop the mistreatment of farm animals and promote compassion. He details the triumphs and the disappointments of more than twenty years on the front lines of the animal protection movement. And he introduces sanctuary. us to some of the special creatures who live at Farm Sanctuary -- from Maya the cow to Marmalade the chicken -- all of whom escaped horrible circumstances to live happier, more peaceful lives. Farm Sanctuary shows how all of us have an opportunity and a responsibility to consume a kinder plate, making a better life for ourselves and animals as well. You will certainly never think of a hamburger or chicken breast the same way after reading this book.

Praise For Farm Sanctuary: Changing Hearts and Minds About Animals and Food…

"In Farm Sanctuary Gene Baur highlights the appalling conditions billions of animals are forced to endure in factory farms -- in order to produce more meat more cheaply in the shortest possible time. His descriptions of the courageous battles fought by many individuals to end such practices are touching. Filled with hope, this book is written for all who strive for a more compassionate world -- I highly recommend it." -- Dr. Jane Goodall, DBE, founder of the Jane Goodall Institute and UN Messenger of Peace

"Starting in the 1980s, Gene rescued neglected, abused, and injured animals from the appalling, disgusting conditions at auctions and stockyards. Meet in this insightful book the fascinating animals he saved." -- Dr. Temple Grandin, author of Animals in Translation

"I have always admired the tremendous work of Farm Sanctuary. Farm animals need our ethical consideration, and Farm Sanctuary has played a central role in getting the issue of their plight on the national agenda." -- Wayne Pacelle, CEO of the Humane Society of the United States

"A beautiful and stirring book, as filled with the spirit of mercy as the place that inspired it." -- Matthew Scully, author of Dominion

"The factory-farming industries do their best to keep people from knowing the truth about how meat, eggs, and dairy are produced. Gene and Farm Sanctuary deserve high praise for working so hard to educate the public and make the world a more compassionate and humane place." -- Moby

"Factory farms subvert democracy and are some of the nation's worst polluters. This book shows how they also treat animals with unspeakable cruelty. Farm Sanctuary is a compelling testament to the need to civilize this industry and end its radical practices for producing meat, dairy, and eggs." -- Robert F. Kennedy, Jr.

Gene Baur is the president and cofounder of the nation's leading farm animal protection organization, Farm Sanctuary, which advocates the fair treatment of farm animals, a return to the roots of agriculture, and the end of animals' suffering for our consumption. Since 1986 his organization has not only helped to enact groundbreaking laws and policies to help prevent sick and diseased animals from ending up on our menus but has also rescued sick, abandoned, and abused animals from farms, stockyards, and slaughterhouses across the country. Baur and his colleagues provide, on farms in New York and California, a safe home and a healthful life for animals who are in desperate need of rescue. Please visit Farm Sanctuary's website at www.farmsanctuary.org.
Loading...
or support indie stores by buying on