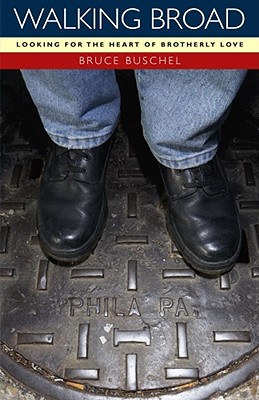 Looking for the Heart of Brotherly Love

Wedged between the hustle of New York and the grandeur of Washington, D.C., Philadelphia is America's smallest big city, America's biggest small city, and America's most American city. It is also a city in flux. Bruce Buschel is a native Philadelphian who revisits his hometown and, in doing so, revisits his personal history and the city's complex identity.

On his thirteen-mile walk down the boulevard, Buschel talks to everyone from the old Italian tailor down the corner from the Chinese Mennonite pastor to the Jewish funeral home director across the street from Bilal, the Muslim restaurateur. On Broad Street, he finds livestock just a few steps from Joe Frazier's gym. The newly dubbed "Gayborhood" is just a stone's throw from the home of the heartbreaking Eagles. A world-class ballet rehearses at the Rock School while outcast rockers practice at the Paul Green School. The gas station attendant on Broad Street may be a recent immigrant, but he has already adopted the brusque manners and terse responses of a fourth-generation Philadelphian. Naturally, William Penn oversees the whole insecure, glorious mess from his perch atop City Hall.

After 9/11, Americans were drawn to Philly's authenticity and history. After decades of decay, something positive is happening, and dyspeptic Philadelphians are trying to adjust.

A lot has changed since Buschel grew up there, but he hasn't managed to shake the attitudes instilled in childhood -- mere mention of the '64 Phillies (and one of the greatest collapses in baseball history) still stings. He has retained his irreverent sense of humor, his distrust of authority, his ambivalence about New York, his disdain for New Jersey, and, above all, his sense of loyalty -- if not outright love -- for his native city.


Praise For Walking Broad: Looking for the Heart of Brotherly Love…

"This is great fun -- jaunty, highly engaging. Very Philly....And we all have family members like this, shadowy memories lost in time forever. Okay, it made me wistful."