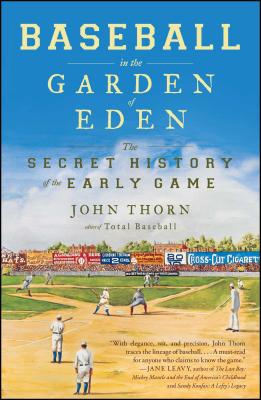 The Secret History of the Early Game

Now available in paperback, the “fresh and fascinating” (The Plain Dealer, Cleveland), “splendid and brilliant” (Philadelphia Daily News) history of the early game by the Official Historian of Major League Baseball.

Who really invented baseball? Forget Abner Doubleday at Cooperstown and Alexander Cartwright. Meet Daniel Lucius Adams, William Rufus Wheaton, and other fascinating figures buried beneath the falsehoods that have accrued around baseball’s origins. This is the true story of how organized baseball started, how gambling shaped the game from its earliest days, and how it became our national pastime and our national mirror.

Baseball in the Garden of Eden draws on original research to tell how the game evolved from other bat-and-ball games and gradually supplanted them, how the New York game came to dominate other variants, and how gambling and secret professionalism promoted and plagued the game. From a religious society’s plot to anoint Abner Doubleday as baseball’s progenitor to a set of scoundrels and scandals far more pervasive than the Black Sox Fix of 1919, this entertaining book is full of surprises. Even the most expert baseball fan will learn something new with almost every page.

Praise For Baseball in the Garden of Eden: The Secret History of the Early Game…


—George F. Will, Author of Men at Work: The Craft of Baseball


—Robert W. Creamer, Author of Babe: The Legend Comes to Life and Stengel: His Life and Times

John Thorn was named the Official Baseball Historian for Major League Baseball by Commissioner Allan H. (Bud) Selig in 2011.  Thorn founded and edits Base Ball: A Journal of the Early Game, a semiannual scholarly publication. He was the coauthor of Total Baseball, a well-known baseball book, and many other baseball books, notably The Hidden Game of Baseball. He often appears on ESPN, the History Channel, and the MLB Network. He was the chief consultant and on-screen historian for Ken Burns's series "Baseball." He serves as publishing consultant to the Pro Football Hall of Fame and the Museum of the City of New York.
Loading...
or support indie stores by buying on