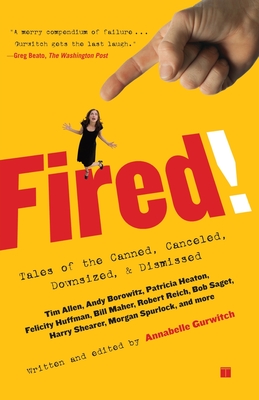 Tales of the Canned, Canceled, Downsized, and Dismissed

If you've ever been fired, you're in good company. That's what actress and writer Annabelle Gurwitch discovered when she was fired by her idol Woody Allen, who added, "You look retarded." In confiding her tale of woe to others, she realized there is a world of people out there with similar laugh-out-loud experiences. How did Bob Saget learn he was being phased out of his job on The Morning Program? "One day I showed up and my hosting chair was gone!"

A collection of anecdotes from people who've all gotten the ax, the boot, or been canned at some point in their lives, Fired! boasts an all-star cast from Tim Allen to Jeff Garlin and features contributions from people all over the country. Uproariously funny and refreshingly true, this book proves it's not the bounce that counts, it's the bounce back.

Annabelle Gurwitch is an actress and writer best known to television audiences as the cohost of the cult TV hit Dinner and a Movie on TBS. She is a contributing writer and commentator on NPR's Day to Day and has appeared in numerous television shows and movies. She lives in Los Angeles with her husband and son.

Annabelle recently appeared in The Shaggy Dog with Tim Allen, stars in the indie Melvin Goes to Dinner with Jack Black, and was recently seen in Boston Legal going toe to toe with Candace Bergen. Ironically, Candace fired Annabelle as her secretary in Murphy Brown.The documentary film Fired! will be coming to theatres in the Fall of 2006 and will then play on The Sundance Channel.

Praise For Fired!: Tales of the Canned, Canceled, Downsized, and Dismissed…

"Trump may have popularized the phrase 'You're fired,' but he certainly hasn't made it any easier to hear. [Gurwitch] is making the saying a little more tolerable."
-- Jane magazine

"A hilarious new book. It's very cathartic and funny!"
-- Peter Rothberg, The Nation

"A merry compendium of failure...Gurwitch gets the last laugh."
-- Greg Beato, The Washington Post

"Been canned lately? Take solace from others who've been there in Fired!"
-- New York Post, #1 on the Hot List
or support indie stores by buying on
Copyright © 2020 American Booksellers Association