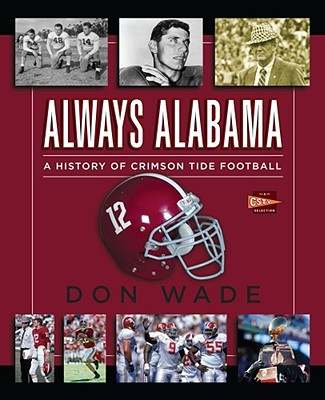 A History of Crimson Tide Football

With twelve national championships, nineteen players and coaches in the College Football Hall of Fame, and a tradition of national achievement that reaches back to the 1920s, the University of Alabama has secured its spot as one of the most successful athletic institutions in the history of American sports. Dating back to the days when university president Dr. George H. "Mike" Denny decided football would be the university's ticket to national prominence and especially during the years of legendary head coach Bear Bryant, Alabama has produced some of the most renowned teams and players in the history of the game.

Always Alabama tells the complete story -- through the eyes of dozens of Alabama insiders and vanquished opponents from the first Crimson Tide team in 1892 right on through the thrilling 2006 Cotton Bowl victory. Don Wade delivers a detailed look at the long and illustrious story of Crimson Tide football. Relive the exhilarating moments of triumph, including:

And hear from the great players -- early legends such as Harry Gilmer and Vaughn Mancha, and larger-than-life heroes such as Lee Roy Jordan, Ken Stabler, and Ozzie Newsome -- and from scores of other players -- some famous, some not so famous -- who have personal stories to tell about the pride and privilege of wearing the red jersey.

With both black-and-white and color photos to help guide the way, Always Alabama is the definitive history of one of the most storied college football programs in the country and a book no college football fan can live without.

Don Wade is a sportswriter for The Commercial Appeal (Memphis). A native of Kansas City and a former feature writer for The Kansas City Star, Don lives in Memphis, Tennessee, with his wife and three sons.
or
Not Currently Available for Direct Purchase
Copyright © 2020 American Booksellers Association