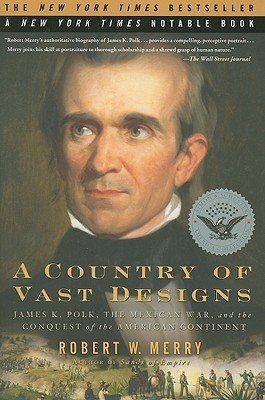 A Country of Vast Designs (Paperback)

James K. Polk, the Mexican War and the Conquest of the American Continent

In a one-term presidency, James K. Polk completed the story of America’s Manifest Destiny—extending its territory across the continent by threatening England with war and manufacturing a controversial and unpopular two-year war with Mexico. "A crucial architect of modern America, James K. Polk deserves to be elevated out of the mists of history" (Jon Meacham, author of American Lion).

Praise For A Country of Vast Designs: James K. Polk, the Mexican War and the Conquest of the American Continent…

“Filled with intricate stories of personal conflict, psychological gamesmanship, and unintended consequences. . . one of the most astute and informative historical accounts yet written about national politics, and especially Washington politics, during the decisive 1840s.”

“Polk was our most underrated President. He made the United States into a continental nation. Bob Merry captures the controversial and the visionary aspects of his presidency in a colorful narrative tale populated by great characters such as Jackson, Clay, and Can Buren.”

–Walter Isaacson, author of Einstein: His Life and Universe

“[Merry] brings a historian's perspective, a journalist's nose for the story and a novelist's eye to one of our country's most dramatic and defining moments. In strong, precise and elegant prose, Mr. Merry brings the key players of the day to life in terms of both personal characteristics and the causes they personified.”
--Washingtonian
or
Buy Here
Copyright © 2020 American Booksellers Association