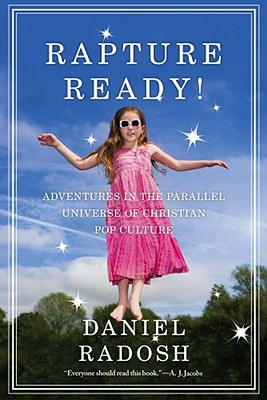 Adventures in the Parallel Universe of Christian Pop Culture

What does it mean when a band is judged by how hard they pray rather than how hard they rock? Would Jesus buy "Jesus junk" or wear "witness wear"? What do Christian skate parks, raves, and romance novels say about evangelicalism -- and America? Daniel Radosh went searching for the answers and reached some surprising conclusions.

Written with the perfect blend of amusement and respect, Rapture Ready! is an insightful, entertaining, and deeply weird journey through the often hidden world of Christian pop culture. This vast and influential subculture -- a $7 billion industry and growing -- can no longer be ignored by those who want to understand the social, spiritual, and political aspirations of evangelical Christians.

In eighteen cities and towns throughout thirteen states -- from the Bible Belt to the outskirts of Hollywood -- Radosh encounters a fascinating cast of characters, including Bibleman, the Caped Christian; Rob Adonis, the founder and star of Ultimate Christian Wrestling; Ken Ham, the nation's leading prophet of creationism; and Jay Bakker, the son of Jim and Tammy Faye Bakker, and pastor of his own liberal, punk rock church.

From Christian music festivals and theme parks to Passion plays and comedy nights, Radosh combines gonzo reporting with a keen eye for detail and just the right touch of wit. Rapture Ready! is a revealing survey of a parallel universe and a unique perspective on one of America's most important social movements.