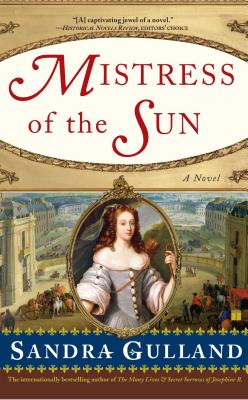 Mistress of the Sun

The author of the internationally acclaimed Josephine Bonaparte trilogy returns with another irresistible historical novel, this one based on the life of Louise de la Vallière, who, against all odds, became one of the most mysterious consorts of France's Louis XIV, the charismatic Sun King.

Set against the magnificent decadence of the seventeenth-century French court, Mistress of the Sun begins when an eccentric young Louise falls in love with a wild white stallion and uses ancient magic to tame him. This one desperate action of her youth shadows her throughout her life, changing it in ways she could never imagine.

Unmarriageable, and too poor to join a convent, Louise enters the court of the Sun King, where the king is captivated by her. As their love unfolds, Louise bears Louis four children, is made a duchess, and reigns unrivaled as his official mistress until dangerous intrigue threatens her position at court and in Louis's heart.

A riveting love story with a captivating mystery at its heart, Mistress of the Sun illuminates both the power of true and perfect love and the rash actions we take to capture and tame it.

Praise For Mistress of the Sun: A Novel…

"Here's a warning: Mistress of the Sun is dangerously seductive. It's one of those books that will grab you and hold you captive till the last page is turned." -- Montreal Gazette

"I fell in love with Petite from the moment she tamed her wild, white horse, and I galloped along with her through her undying devotion to one of France's most colorful kings." -- Anne Easter Smith, author of The King's Grace and A Rose for the Crown

"...this is a fine telling, bolstered by the strength and sensitivity of Gulland's characterizations." -- Kirkus Reviews

"This lively story is rich in period detail...Gulland successfully unfolds the story of Petite and Louis while smoothly weaving in other actual historical personages." -- Rocky Mountain News

Sandra Gulland is the author of  Mistress of the Sun; The Many Lives & Secret Sorrows of Josephine B.; Tales of Passion, Tales of Woe; and The Last Great Dance on Earth. She lives in Killaloe, Ontario, and San Miguel de Allende, Mexico.
Loading...
or support indie stores by buying on