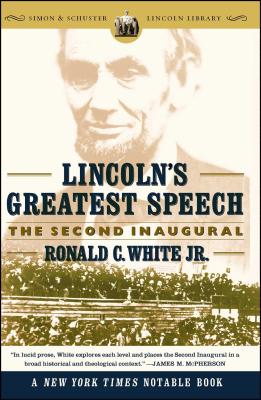 As the day for Lincoln's second inauguration drew near, Americans wondered what their sixteenth president would say about the Civil War. Would Lincoln guide the nation toward “Reconstruction”? What about the slaves? They had been emancipated, but what about the matter of suffrage?

When Lincoln finally stood before his fellow countrymen on March 4, 1865, and had only 703 words to share, the American public was stunned. The President had not offered the North a victory speech, nor did he excoriate the South for the sin of slavery. Instead, he called the whole country guilty of the sin and pleaded for reconciliation and unity.

In this compelling account, noted historian Ronald C. White Jr. shows how Lincoln's speech was initially greeted with confusion and hostility by many in the Union; commended by the legions of African Americans in attendance, abolitionist leader Frederick Douglass among them; and ultimately appropriated by his assassin John Wilkes Booth forty-one days later.

Filled with all the facts and factors surrounding the Second Inaugural, Lincoln's Greatest Speech is both an important historical document and a thoughtful analysis of Lincoln's moral and rhetorical genius.

"In lucid prose, White explores each level and places the Second Inaugural in a broad historical and theological context." -- James M. Mcpherson

"Professor White's book on the preparation, delivery, and influences of Lincoln's Second Inaugural Address is a significant addition to Civil War literature." -- Shelby Foote, author of The Civil War: A Narrative

"[Lincoln's Greatest Speech] is going to have a wide impact on Lincoln scholarship." -- David Herbert Donald, author of Lincoln

Ronald C. White Jr. is professor of American Intellectual and Religious History at San Francisco Theological Seminary, as well as the author and editor of five books. He lives in La Cañada, California.
Loading...
or support indie stores by buying on