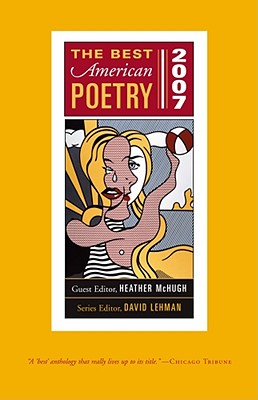 The twentieth edition of The Best American poetry series celebrates the rich and fertile landscape of American poetry. Renowned poet Heather McHugh loves words and the unexpected places they take you; her own poetry elevates wordplay to a species of metaphysical wit. For this year's anthology McHugh has culled a spectacular group of poems reflecting her passion for language, her acumen, and her vivacious humor.

From the thousands of poems published or posted in one year, McHugh has chosen seventy-five that fully engage the reader while illustrating the formal and tonal diversity of American poetry. With new work by established poets such as Louise Glück, Robert Hass, and Richard Wilbur, The Best American Poetry 2007 also features such younger talents as Ben Lerner, Meghan O'Rourke, Brian Turner, and Matthea Harvey.

Graced with McHugh's fascinating introduction, the anthology includes the ever-popular notes and comments section in which the contributors write about their work. Series editor David Lehman's engaging foreword limns the necessity of poetry. The Best American Poetry 2007 is an exciting addition to a series committed to covering the American poetry scene and delivering great poems to a broad audience.

Heather McHugh is the author of numerous books of poetry, including Eyeshot and Hinge & Sign. She teaches at the University of Washington in Seattle and at Warren Wilson College in North Carolina.

"A 'best' anthology that really lives up to its title."
-- Chicago Tribune

"Each year, a vivid snapshot of what a distinguished poet finds exciting, fresh and memorable: and over the years, as good a comprehensive overview of contem-porary poetry as there can be."
-- Robert Pinsky
or
Not Currently Available for Direct Purchase
Copyright © 2020 American Booksellers Association