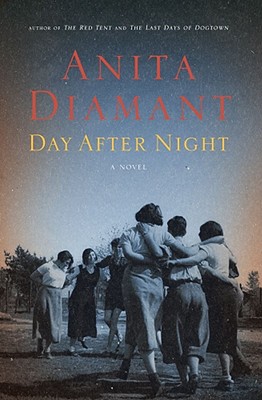 “Four women with four different stories of surviving the European Jewish Holocaust find themselves in an internment camp run by the British military in Palestine as illegals, Jews without papers. Based on the true story of a dramatic rescue in 1945 of more than 200 prisoners at the Atlit internment camp, this extraordinary novel is equal parts history, adventure, and celebration of the profound determination of the human psyche. I loved this book and will recommend it for reading groups.”
— Kris Kleindienst, Left Bank Books, Saint Louis, MO
View the List

“World War II is over and it is the 'twilight of colonial rule' in the Middle East. Still, the British are wielding a firm grip on the Holy Land and Jewish refugees are being interned in camps that, while not nearly what they experienced under the Nazis, are a barrier to the freedom that the Holocaust survivors seek and deserve. Diamant shows us the seeds of the state of Israel through the eyes of several women who have been waylaid at camp: Atlit, in Palestine for a variety of reasons; Tedi, a lovely, blue-eyed Jewish girl from Amsterdam; angry Zorah from a poor Warsaw ghetto; and Shayndel and Leonie, fast friends from vastly different backgrounds, one a prostitute in Paris during the war, and the other a resistance fighter from Nazi-occupied Vilnius. This book ultimately gives us renewed faith in humanity.”
— Anne Holman, The King's English, Salt Lake City, UT
View the List

The bestselling author of Good Harbor and The Last Days of Dogtown returns to the geography of The Red Tent and re-imagines a true event in the aftermath of World War II in an intensely dramatic, profoundly sad new novel.

In her most moving and powerful novel ever, Anita Diamant portrays richly imagined female characters in a haunting fictionalization of the post-Holocaust experience.

Atlit is a holding camp for "illegal" immigrants in Israel in 1945. There, about 270 men and women await their future and try to recover from their past. Diamant, with infinite compassion and understanding, tells the stories of the women gathered in this place.

Shayndel is a Polish Zionist who fought the Germans with a band of partisans. Leonie is a Parisian beauty. Tedi is Dutch, a strapping blond who wants only to forget. Zorah survived Auschwitz. Haunted by unspeakable memories and too many losses to bear, these young women, along with a stunning cast of supporting characters who work in or pass through Atlit, begin to find salvation in the bonds of friendship and shared experience, as they confront the challenge of re-creating themselves and discovering a way to live again.

is a devastatingly beautiful novel, a story only Anita Diamant could tell, and it will make every reader weep.
or
Not Currently Available for Direct Purchase
Copyright © 2020 American Booksellers Association