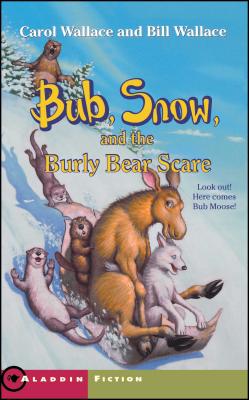 "Don't ever run from a mountain lion."

Mother also warned me about people. But she didn't know Jane and Jussy, the children who left us hay when we were so hungry. I may be a little moose, but I'm no dummy. That hay was sooo good....
After our dangerous journey over the mountains, everything here seemed wonderful. I made friends with Raney and Sweet Pea, draft horses on the farm, and Chippy the beaver. I even found my old pal, Snow the wolf. Everything was perfect. Until we met Burly!
A grizzly with insomnia, Burly was about the nastiest, scariest character I ever met. All I wanted to do was stay away from him. But when he went after my friends...well, what's a moose to do?