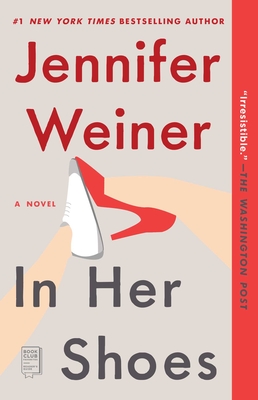 From Jennifer Weiner comes a story of two sisters with nothing in common but a love for shoes learn they are more alike than they thought possible.

Meet Rose Feller, a thirty-year-old high-powered attorney with a secret passion for romance novels. She has an exercise regime she's going to start next week, and she dreams of a man who will slide off her glasses, gaze into her eyes, and tell her she's beautiful. She also dreams of getting her fantastically screwed-up, semi-employed little sister to straighten up and fly right.

Meet Rose's sister, Maggie. Twenty-eight years old and drop-dead gorgeous. Although her big-screen stardom hasn't progressed past her left hip's appearance in a Will Smith video, Maggie dreams of fame and fortune -- and of getting her big sister on a skin-care regimen.

These two women, who claim to have nothing in common but a childhood tragedy, DNA, and the same size feet, are about to learn that they're more alike than they'd ever imagined. Along the way, they'll encounter a diverse cast of characters -- from a stepmother who's into recreational Botox to a disdainful pug with no name. They'll borrow shoes and clothes and boyfriends, and eventually make peace with their most intimate enemies -- each other.

Praise For In Her Shoes: A Novel…

Philadelphia Inquirer If chick lit is indeed a genre, Weiner is creating a smarter, funnier subspecies...[She] is a sharp observer of the frustrations of blood ties.

People Weiner's vivid characterizations and her light touch with heavy topics make this follow-up...like spending time with an understanding friend who has a knack for being great company.

Jennifer Weiner is the #1 New York Times bestselling author of nineteen books, including That Summer, Big Summer, Mrs. Everything, In Her Shoes, Good in Bed, and a memoir in essays, Hungry Heart. She has appeared on many national television programs, including Today and Good Morning America, and her work has been published in The Wall Street Journal and The New York Times, among other newspapers and magazines. Jennifer lives with her family in Philadelphia. Visit her online at JenniferWeiner.com.
Loading...
or support indie stores by buying on