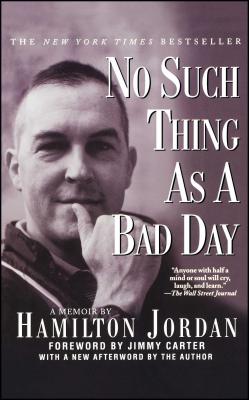 No Such Thing as a Bad Day

An astounding collection of adventures and observations, woven into a dramatic account that helps to clarify some of the mysteries of our nation's recent history....Hamilton's story offers a rare combination of insight, wry humor, and real inspiration." -- Jimmy Carter, in the Foreword Hamilton Jordan has had a life full of personal struggles, from firsthand encounters with racial hatred in the Civil Rights-era South to exposure to Agent Orange as a civilian volunteer in Vietnam and his tumultuous years as the youngest chief of staff in presidential history, under Jimmy Carter. But a more powerful opponent has defined Jordan's life -- cancer. Three times in the last twenty years he has been diagnosed with the disease: non-Hodgkin's lymphoma, melanoma, and prostate cancer. Each time, Jordan credits early detection, being well-informed, and keeping positive as the keys to his survival. In this beautifully written book, Jordan weaves together his remarkable life to date with the uplifting story of his victories over cancer. Moving, inspiring, and powerful, No Such Thing As A Bad Day is a read that no one will soon forget.

Praise For No Such Thing as a Bad Day…


Anyone with half a mind or soul will cry, laugh, and learn.


Titles come and go, and White House chiefs of staff can exit faster than they entered. But Jordan, at fifty-five, would have you believe he has larger fish to fry than congressmen and Cabinet secretaries wanting fifteen minutes with the president of the United States, not to mention the door-pounding Washington media....The architect of Jimmy Carter's improbable nomination for the presidency tells how quickly power and position fade to irrelevance and how one's sense of proportion can change.


Jordan serves up wise counsel, instructive insights, and important hope to the millions of American families afflicted with this dreaded disease. Along the way, he offers delicious, sometimes biting, political perspectives.


An inspiring journey of a man who feels lucky to be alive...a story worth hearing and a story worth reading.

Hamilton Jordan (1944 - 2008) spearheaded Jimmy Carter's successful campaign for the presidency and served as the chief of staff in the Carter administration. He is the author of the bestselling Crisis, which recounted Carter's secret negotiations to free the American hostages in Iran. After leaving Washington, DC, he became an investor, adviser, and board member for a variety of successful companies and start-ups
Loading...
or support indie stores by buying on