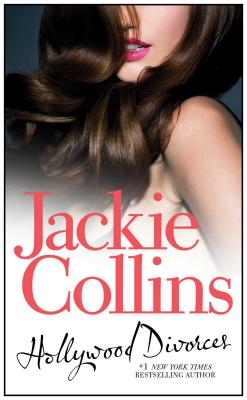 In her most scandalously titillating novel since the #1 bestselling Hollywood Wives, internationally renowned author Jackie Collins once again takes her readers behind the scenes and into the bedrooms of Hollywood's glamorous world of superstardom, where narcissism is a virtue, and fidelity means not sleeping with anyone less attractive than your spouse.

WHEN HOLLYWOOD WIVES WANT MORE, IT’S TIME FOR HOLLYWOOD DIVORCES . . .the bestselling novel of lust, betrayal, and breakup in L.A., where fidelity means never sleeping with anyone less attractive than your spouse.

Three glamorous women with ambitions fueling their inner fires— and agendas that may or may not include those they’ve vowed to love and honor. From the casting couch to superstardom, from the director’s chair to worldwide acclaim, they go after what they want without guilt. Without regret. And never without scandal. Here are the relationship shockers that even the tabloids don’t know: who’s playing whom, who’s getting dumped, and who’s walking out the door. This is domestic drama like never before, as only the “EVER STYLIN’” (Publishers Weekly) Jackie Collins can tell it.

Jackie Collins lived in Beverly Hills where she had a front row seat to the lives she so accurately captured in her compulsive plotlines. She was a creative force, a trailblazer for women in fiction and in her own words “A kick-ass writer!”
or
Buy Here
(This book is on backorder)
Copyright © 2020 American Booksellers Association