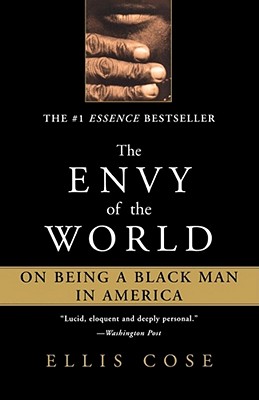 The Envy of the World (Paperback)

On Being a Black Man in America

With a compassionate eloquence reminiscent of James Baldwin's Letter to My Nephew, Ellis Cose presents a realistic examination of the challenges facing black men in modern America.
Black men have never had more opportunity for success than today -- yet, as bestselling author Cose puts it, "We are watching the largest group of black males in history stumbling through life with a ball and chain." Add to that the ravages of AIDS, murder, poverty, illiteracy, and the widening gap separating the black "elite" from the "underclass," and the result is a paralyzing pessimism. But even as Cose acknowledges the obstacles that confront black men, he refuses to accept them as reasons for giving up; instead he rails against the destructive attitude that has made academic achievement a source of shame instead of pride in many black communities -- and outlines steps black males can take to enhance their odds for success.
With insightful anecdotes about a broad range of black men from all walks of life, Cose delivers a warning of the vast tragedy that is wasted black potential, and a call to arms that can enable black men to reclaim their destiny in America.

Ellis Cose, author of seven books, including the bestselling The Envy of the World, Color-Blind, and The Rage of a Privileged Class, is a columnist and contributing editor for Newsweek magazine. He has appeared on Nightline, Dateline, Good Morning America, PBS's NewsHour with Jim Lehrer, NPR, and other national television and radio programs. He lives in New York City with his wife and daughter.

Praise For The Envy of the World: On Being a Black Man in America…

Chicago Tribune Cose writes with the urgency of a man who is single-handedly trying to save the race....But young black males are not his only intended audience. The Envy of the World speaks to the rest of us as well.

Claude Brown Author of Manchild in the Promised Land The Envy of the World will stimulate, provoke and jolt the reader loose from previously held misconceptions on the American race issue. A must-read book for the new millennium.
or support indie stores by buying on
Copyright © 2020 American Booksellers Association