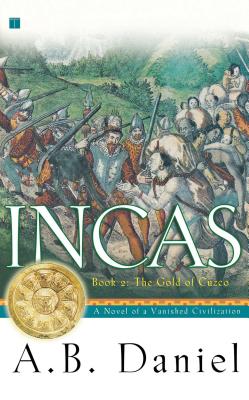 Book Two: The Gold of Cuzco

In this haunting second book of the internationally bestselling Incas trilogy, the Incan empire is threatened by the Conquistadors, whose insatiable hunger for gold will destroy a glorious, ancient civilization -- unless they can be thwarted by a mystic force greater than any army....

Princess Anamaya's hypnotic blue eyes have seen too much. Having guarded the passage of the dying Emperor, she is now chosen by the gods to stand beside the new Emperor and divine the future of the Incan Empire -- a future shadowed by brutal warriors who worship foreign gods. The Conquistadors and their armies seek to enslave the Incas and loot their sacred temples and royal treasuries, despite Anamaya's attempts to foster peace. When it comes to a prize as valuable as Cuzco, the city of the sacred puma, they refuse to heed her warnings.
The soldier Gabriel has come among Anamaya's people as a conqueror, but the honorable Spaniard is untainted by his companions' lust for wealth and power. His fascination with the splendor of Anamaya's land, and its ancient heritage, is matched only by the passion he and Anamaya come to share. But when his countrymen push forward in their quest to plunder Cuzco, he is forced to join the battle, leaving Anamaya struggling with divided loyalties and their forbidden love in the wake of this first major confrontation between the Spanish and the Incas.
Filled with romance and adventure and colored by the changeless desires that link man and woman throughout the ages, The Gold of Cuzco is a thrilling follow-up to The Puma's Shadow, the first book in the Incas trilogy.

A.B. Daniel is a pseudonym for two novelists, Antoine Audouard and Jean-Daniel Baltassat, who have been helped in their construction and research of the story by the Inca specialist, Bertrand Houette.
Loading...
or support indie stores by buying on