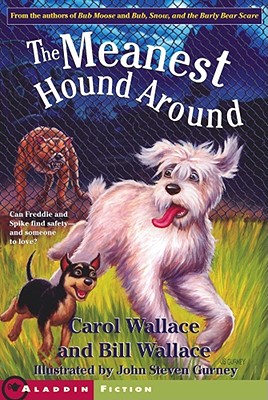 The Meanest Hound Around (Paperback)

DUMPED!
Freddie is a well-bred, well-mannered, fluffy white dog -- not the sort you'd expect to get dumped. But that's what happens. Now he's on his own -- alone on the streets -- until he meets up with Spike, a watchdog-in-training, who's just not mean enough to satisfy his cruel junkyard master.
Freddie helps his new friend escape, and together they set out, struggling through danger and adventure to find a new home.
But can either one really trust humans again? And if so, will Spike's past life threaten his newfound happiness -- and Freddie's as well?

Bill Wallace grew up in Oklahoma. Along with riding their horses, he and his friends enjoyed campouts and fishing trips. Toasting marshmallows, telling ghost stories to scare one another, and catching fish was always fun.
One of the most memorable trips took place on the far side of Lake Lawtonka, at the base of Mt. Scott. He and his best friend, Gary, spent the day shooting shad with bow and arrows, cutting bank poles, and getting ready to go when their dads got home from work.
Although there was no "monster" in Lake Lawtonka, one night there was a "sneak attack" by a rather large catfish tail. Checking the bank poles was not nearly as fun or "free" after that point, but it was the inspiration for this story.
Bill Wallace has won nineteen children's state awards and been awarded the Arrell Gibson Lifetime Achievement Award for Children's Literature from the Oklahoma Center for the Book.

Praise For The Meanest Hound Around…

School Library Journal A story to melt the heart of the most reluctant reader....For early readers who like animal stories, this one is a good choice.
or
Not Currently Available for Direct Purchase
Copyright © 2020 American Booksellers Association