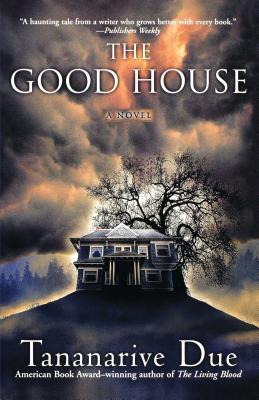 The Good House is the critically acclaimed story of supernatural suspense, as a woman searches for the inherited power that can save her hometown from evil forces.

The home that belonged to Angela Toussaint's late grandmother is so beloved that the townspeople in Sacajawea, Washington call it the Good House. But that all changes one summer when an unexpected tragedy takes place behind its closed doors, and the Toussaint's family history—and future—is dramatically transformed.

Angela has not returned to the Good House since her son, Corey, died there two years ago. But now, Angela is finally ready to return to her hometown and go beyond the grave to unearth the truth about Corey's death. Could it be related to a terrifying entity Angela's grandmother battled seven decades ago? And what about the other senseless calamities that Sacajawea has seen in recent years? Has Angela's grandmother, an African American woman reputed to have "powers," put a curse on the entire community?

A thrilling exploration of secrets, lies, and divine inspiration, The Good House will haunt readers long after its chilling conclusion.

Peter Straub Tananarive Due is a writer with something to say to everyone, and The Good House is her most eloquent, impassioned, thrilling book yet. This is the work of a great storyteller who has come fully into the center of her magnificent talent.

Graham Joyce Author of The Facts of Life A subtle tale of terror. Tananarive Due is a powerful storyteller with a rich social agenda.

Valerie Wilson Wesley Author of the Tamara Hayle mysteries When it comes to suspense, Tananarive Due has no equal. The Good House is as packed with thrills as it is well-written...another winner!

John Ridley Author of A Conversation with the Mann Long one of the reigning icons of suspense, with The Good House Tananarive completes the near impossible: she outdoes even herself. [She] delivers a novel that is as haunting as it is humanistic. Long time fans can look forward to a welcome return. New readers are in for a great beginning.

Nalo Hopkinson Author of Midnight Robber Shiveringly good. Due has an unflinching way with the terrors that can beset the nuclear family, and with the love and honesty, can heal it.

Tananarive Due is an American Book Award–winning, Essence bestselling author of sixteen books, including the Blood Colony, The Living Blood, The Good House, Joplin’s Ghost, and Devil’s Wake. She was also a contributor to Jonathan Maberry’s middle grade anthology, Don’t Turn Out the Lights. She has won an American Book Award, an NAACP Image Award, and a British Fantasy Award. She teaches Black Horror and Afrofuturism at UCLA. She lives in Atlanta, Georgia. Visit her website TananariveDue.com.
Loading...
or support indie stores by buying on