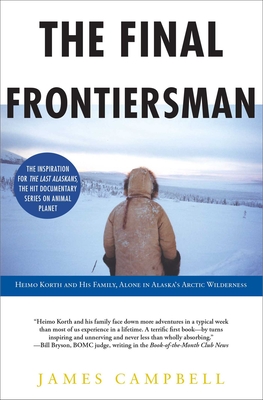 The inspiration for The Last Alaskans—the hit documentary series now on the Discovery+—James Campbell’s inimitable insider account of a family’s nomadic life in the unshaped Arctic wilderness “is an icily gripping, intimate profile that stands up well beside Krakauer’s classic [Into the Wild], and it stands too, as a kind of testament to the rough beauty of improbably wild dreams” (Men’s Journal).

Hundreds of hardy people have tried to carve a living in the Alaskan bush, but few have succeeded as consistently as Heimo Korth. Originally from Wisconsin, Heimo traveled to the Arctic wilderness in his twenties. Now, more than three decades later, Heimo lives with his wife and two daughters approximately 200 miles from civilization—a sustainable, nomadic life bounded by the migrating caribou, the dangers of swollen rivers, and by the very exigencies of daily existence.

In The Final Frontiersman, Heimo’s cousin James Campbell chronicles the Korth family’s amazing experience, their adventures, and the tragedy that continues to shape their lives. With a deft voice and in spectacular, at times unimaginable detail, Campbell invites us into Heimo’s heartland and home. The Korths wait patiently for a small plane to deliver their provisions, listen to distant chatter on the radio, and go sledding at 44 degrees below zero—all the while cultivating the hard-learned survival skills that stand between them and a terrible fate.

Awe-inspiring and memorable, The Final Frontiersman reads like a rustic version of the American Dream and reveals for the first time a life undreamed by most of us: amid encroaching environmental pressures, apart from the herd, and alone in a stunning wilderness that for now, at least, remains the final frontier.

Praise For The Final Frontiersman: Heimo Korth and His Family, Alone in Alaska's Arctic Wilderness…

"What makes this more than just a profile of a fascinating personality is Campbell's deft weaving of Alaskan history into Korth's tale."
-- Publishers Weekly

"[One of] the greatest life-or-death tales ever told."
-- Esquire

"Campbell makes the case that an increasingly urban America -- and its desires for oil, for timber, for neat and packaged wilderness -- is killing and, worse, forgetting the frontier we once worshiped."
-- The New York Times

"The Final Frontiersman is an icily gripping, intimate profile that stands up well beside Krakauer's classic, and it stands too, as a kind of testament to the rough beauty of improbably wild dreams."
-- Men's Journal

"Heimo Korth and his family face down more adventures in a typical week than most of us experience in a lifetime. A terrific first book -- by turns inspiring and unnerving and never less than wholly absorbing."
-- Bill Bryson, BOMC judge, writing in the Book-of-the-Month Club News

James Campbell has written for National Geographic Adventure, Outside, and Men’s Journal, among other publications. His book The Final Frontiersman is the inspiration for the documentary series, The Last Alaskans. He lives in Wisconsin with his wife and two daughters.
Loading...
or support indie stores by buying on