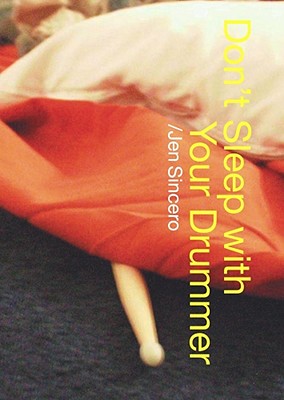 Don't Sleep With Your Drummer

At twenty-eight, Jenny Troanni has decided to become the rock goddess she was always meant to be. Items on her new to-do list include:
1) Quit going-somewhere copywriting job and get going-to-band-practice job.
2) Break up with Hootie and the Blowfish-lovin' boyfriend.
3) Hang out in skanky bars. Meet musicians.
4) Cash in pension and buy kickass guitar amp.
5) Team up with sex-crazed guitar genius/best friend Lucy Stover Hanover II.
After auditioning every musician in the greater Los Angeles area---including the deluded, deranged, and underaged---Jenny finds the perfect lineup, and 60-Foot Queenie is born. But while reveling in free tequila shots, autograph hunters, and other perks of minor stardom, Jenny realizes with a shock that 60-Foot Queenie is poised to become even bigger than she imagined. Suddenly, she's learning the real lessons of Rock and Roll High School, including the danger of trusting a record company executive who ties a ponytail in his goatee, and the ten telltale signs your bass player is living in your practice space.
Part diary, part crash course in rock stardom, Don't Sleep with Your Drummer is a hilarious, no-holds-barred guide through the pleasures and pitfalls of the music industry---from the beginning to the bitter end, and back again.

Jen Sincero is the New York Times bestselling author of You Are a Badass, Badass Habits,The Straight Girl's Guide to Sleeping with Chicks, and the semi-autobiographical novel Don't Sleep with Your Drummer. At the moment she lives in California and can be found on the web at JenSincero.com.
Loading...
or support indie stores by buying on