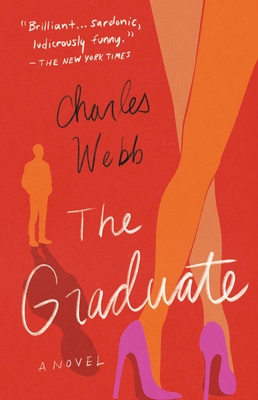 The basis for Mike Nichols' acclaimed 1967 film starring Dustin Hoffman -- and for successful stage productions in London and on Broadway -- this classic novel about a naive college graduate adrift in the shifting social and sexual mores of the 1960s captures with hilarity and insight the alienation of youth and the disillusionment of an era.
The Graduate
When Benjamin Braddock graduates from a small Eastern college and moves home to his parents' house, everyone wants to know what he's going to do with his life. Embittered by the emptiness of his college education and indifferent to his grim prospects -- grad school? a career in plastics? -- Benjamin falls haplessly into an affair with Mrs. Robinson, the relentlessly seductive wife of his father's business partner. It's only when beautiful coed Elaine Robinson comes home to visit her parents that Benjamin, now smitten, thinks he might have found some kind of direction in his life. Unfortuately for Benjamin, Mrs. Robinson plays the role of protective mother as well as she does the one of mistress. A wondrously fierce and absurd battle of wills ensues, with love and idealism triumphing over the forces of corruption and conformity.

Praise For The Graduate…

Charles Webb is also the author of New Cardiff. He lives with his wife in East Sussex, England.
Loading...
or support indie stores by buying on