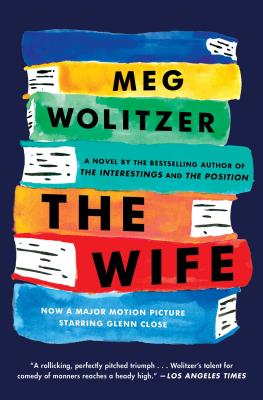 The Wife is the story of the long and stormy marriage between a world-famous novelist, Joe Castleman, and his wife Joan, and the secret they’ve kept for decades. The novel opens just as Joe is about to receive a prestigious international award, The Helsinki Prize, to honor his career as one of America’s preeminent novelists. Joan, who has spent forty years subjugating her own literary talents to fan the flames of his career, finally decides to stop.

Important and ambitious, The Wife is a sharp-eyed and compulsively readable story about a woman forced to confront the sacrifices she’s made in order to achieve the life she thought she wanted. “A rollicking, perfectly pitched triumph…Wolitzer’s talent for comedy of manners reaches a heady high” (Los Angeles Times), in this wise and candid look at the choices all men and women make—in marriage, work, and life.

Meg Wolitzer’s novels include The Female Persuasion; Sleepwalking; This Is Your Life; Surrender, Dorothy; and The Position. She lives in New York City.

Praise For The Wife: A Novel…

Entertainment Weekly Acerbically funny...Wolitzer keeps us guessing right up until the gut-wrenching twist of a finale.

The Washington Post To say that The Wife is Wolitzer's most ambitious novel to date is an understatement. This important book introduces another side of a writer we thought we knew: Never before has she written so feverishly, so courageously.

The New York Times Book Review Deploys a calm, seamless humor...Rage might be the signature emotion of the powerless, but in Wolitzer's hands, rage is also very funny.
or support indie stores by buying on
Copyright © 2020 American Booksellers Association