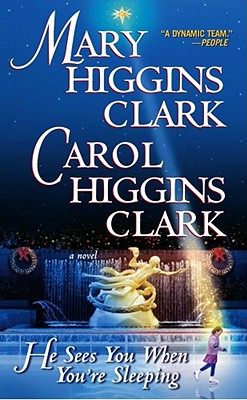 He Sees You When You're Sleeping

From the "Queen of Suspense," Mary Higgins Clark, and bestselling author Carol Higgins Clark -- the acclaimed mother/daughter duo -- comes this holiday treat, a heartwarming tale of redemption and love.

He Sees You When You're Sleeping

Sterling Brooks has been cooling his heels in the Celestial Waiting Room for forty-six years, waiting for admission to heaven. Finally, just days before Christmas, he's summoned before the Heavenly Council and found unworthy; throughout his life he had been hopelessly self-absorbed. To redeem himself, he is given the chance to go back to Earth and find someone to help.

At New York's Rockefeller Center skating rink, Sterling encounters Marissa, a heartbroken seven-year-old whose father and grandmother have been forced into the Witness Protection Program; they had overheard two gangsters hatch a sinister plot to collect money from a debtor. Able to travel through time and space, Sterling devises a master plan to reunite little Marissa with her family in time for Christmas. Along the way, he discovers within himself what it takes to earn his wings.

Praise For He Sees You When You're Sleeping: A Novel…

Carol Higgins Clark is the author of the bestselling Regan Reilly mysteries. She is coauthor, along with her mother, Mary Higgins Clark, of a bestselling holiday suspense series. Also an actress, Carol Higgins Clark studied at the Beverly Hills Playhouse and has recorded several novels. She received AudioFile’s Earphones Award of Excellence for her reading of Jinxed. She lives in New York City. Her website is CarolHigginsClark.com.