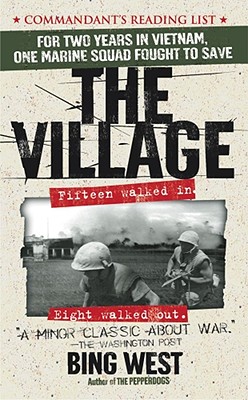 The true story of seventeen months in the life of a Vietnamese village where a handful of American Marines and Vietnamese militia lived and died together attempting to defend it.

In Black Hawk Down, the fight went on for a day. In We Were Soldiers Once & Young, the fighting lasted three days. In The Village, one Marine squad fought for 495 days—half of them died.

Few American battles have been so extended, savage and personal. A handful of Americans volunteered to live among six thousand Vietnamese, training farmers to defend their village. Such “Combined Action Platoons” (CAPs) are now a lost footnote about how the war could have been fought; only the villagers remain to bear witness. This is the story of fifteen resolute young Americans matched against two hundred Viet Cong; how a CAP lived, fought and died. And why the villagers remember them to this day.

Praise For The Village…

The New York Times A vivid and unbiased portrait of one Vietnamese hamlet in the grip of war...Exceptional insight....West has told this story with honesty and without embroidery, while bringing out its inherent human drama.

Charles B. MacDonald Author of Company Commander Unquestionably the best book to come out of the Vietnam war -- human, compassionate, suspenseful, dramatic.

Washington Post Book Review This is the way Vietnam should have been fought -- by tough volunteers who lived alongside the Vietnamese....It will take the sternest idealogue to remain unmoved by West's perceptive and human treatment of the men who fought it....It's an account of brave men at war in a far country, honestly told.

Keith William Nolan Author of The Battle for Saigon and A Hundred Miles of Bad Road One of the small handful of truly great books to come out of the Vietnam war.

Pacific Affairs Pure Hemingway in the best sense of that characterization....West brilliantly portrays the drama of a war few Americans have known.

Leatherneck Magazine A fantastic, down in the mud and crud book of enlisted Marines fighting to defend a village....West tells of some of the victories and the tragic cost. And he tells it well.

Francis J. "Bing" West served in Vietnam as a Marine infantry officer, and later as Assistant Secretary of Defense for International Security Affairs, Dean of Research at the Naval War College, an analyst at the RAND Corporation, and a lead CNN commentator during Desert Storm. A frequent contributor to defense journals, West is also the author nine books.
Loading...
or
Not Currently Available for Direct Purchase