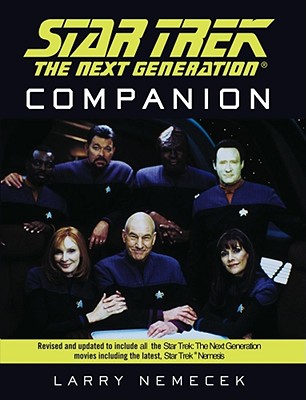 The Star Trek The Next Generation Companion

On September 8, 1987 -- more than twenty years after the original Star Trek® series first aired -- millions of Star Trek fans across the country sat down in front of their television sets for the debut of an all-new Star Trek series. No expense had been spared in bringing this new show to life -- the creator of the original Star Trek series, Gene Roddenberry, was back producing the new show. Yet even the most faithful of Star Trek fans had their doubts -- could the magic be duplicated?

The answer to that question proved to be a resounding yes. Led by Captain Jean-Luc Picard, the U.S.S. Enterprise™ NCC-1701-D blazed a trail of exciting adventures across the galaxy. In show after show, Star Trek: The Next Generation brought to life a future where cooperation and mutual understanding proved the keys to solving humanity's problems -- and enabled galactic civilization to flourish.

Here is the complete official guide to every episode of the television adventures of the Starship Enterprise and all four of the major motion pictures from Star Trek Generations™ to the latest, Star Trek Nemesis. This companion is a compendium of information including plot summaries and credits for each show and motion picture, as well as fascinating behind-the-scenes glimpses into the creation of The Next Generation. Take a glimpse into the show's incredible seven-year run, during which it reigned at the very top of the syndicated television ratings. Illustrated with more than 150 photographs, this is the official reference guide to Star Trek: The Next Generation.