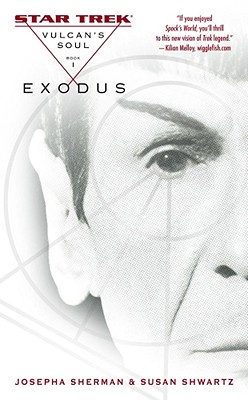 The first in a thrilling trilogy from the bestselling authors of Vulcan’s Forge and Vulcan’s Heart chronicles the latter-day adventures of one of Star Trek’s most beloved characters, shedding new light on his world’s fascinating history.

One year after the end of the Dominion War, the Romulan Star Empire comes under attack by a mysterious and alarmingly powerful enemy calling itself the Watraii, a species with a long-standing vendetta against the Romulans. Yet though they remain tenuously allied, the Federation, the Romulans, and the Klingons are ill-prepared to become embroiled in another sustained conflict, forcing Ambassador Spock, Admiral Uhura, Admiral Chekov, Captain Saavik, and some unexpected allies to defy their governments in order to meet the new threat head-on.

But the first blood drawn may prove to be among the dearest of all. Unknown to the defenders, the secret behind the Watraii’s attack is buried in Vulcan’s violent ancient past, during the time of Surak himself. Now Spock must begin the first leg of a long and dangerous road to learn the truth...before his hopes for the future become ashes.

Josepha Sherman was an American author, folklorist, and anthologist. In 1990 she won the Compton Crook Award for the novel The Shining Falcon. She died in 2012, and is remembered for her large and diverse output of both high-quality fiction and nonfiction.

Susan Shwartz is the author of such acclaimed novels as The Grail of Hearts, Shards of Empire, and Hostile Takeover. She lives in Forest Hills, New York.

"...A tale rich in folklore and history, revealing to us that there's more to Spock's home planet than meets the eye. And if you think you know all there is to the planet Vulcan...think again."
-- Bill Williams, trekweb.com
or support indie stores by buying on
Copyright © 2020 American Booksellers Association