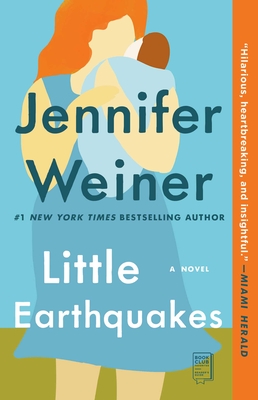 Jennifer Weiner's richest, wittiest, most true-to-life novel yet tells the story of three very different women as they navigate one of life's most wonderful and perilous transitions: the journay of new motherhood.

Becky is a plump, sexy chef who has a wonderfull husband and baby girl, a restaurant that received a citywide acclaim -- and the mother-in-law from hell. Kelly is an event planner who's struggling to balance her work and motherhood while dealing with unemployed husband who seems content to channel-surf for eight hours a day. Ayinde's basketball superstar husband breaks her trust at her most vulnerable moment, putting their new family even more in the public eye. Then, there's Lia, a Philadelphia native who has left her Hollywood career behind, along with her husband, and a tragic secret to start her life all over again.

From prenatal yoga to postbirth sex, Little Earthquakes is a frank, funny, fiercely perceptive take on the comedies and tragedies of love and marriage.

Praise For Little Earthquakes: A Novel…

"Immensely readable.... Weiner's gift lies in her ability to create characters who both amuse us and make us care."
-- The Washington Post

"Weiner, a wonderful natural writer and storyteller, renders her characters and their...lives in details that resonate as the real deal."
-- Publishers Weekly (starred review)

Jennifer Weiner is the #1 New York Times bestselling author of nineteen books, including That Summer, Big Summer, Mrs. Everything, In Her Shoes, Good in Bed, and a memoir in essays, Hungry Heart. She has appeared on many national television programs, including Today and Good Morning America, and her work has been published in The Wall Street Journal and The New York Times, among other newspapers and magazines. Jennifer lives with her family in Philadelphia. Visit her online at JenniferWeiner.com.
Loading...
or support indie stores by buying on