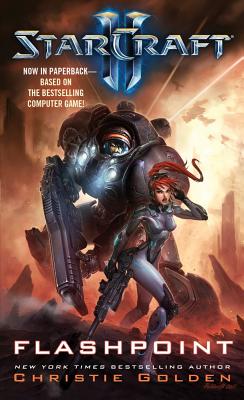 The explosive novel based on the eagerly anticipated StarCraft II video game expansion, Heart of the Swarm!

The sinister zerg leader no longer commands her legions of bloodthirsty aliens against the humans of the Koprulu sector, all thanks to the combined courage and tenacity of Jim Raynor, General Horace Warfield, and a mismatched team of Dominion soldiers and outlaw rebels.

Although the queen is no more, Sarah Kerrigan is very much alive. The woman who once controlled countless alien minds in a rampage across the stars has been spirited away by the man who dethroned her. Now Arcturus Mengsk’s Dominion armada is on her heels, roaring for blood. Jim Raynor will need to test his strength, his wit, and his loyalties against impossible odds to protect the woman he loves. StarCraft II: Flashpoint bridges the events that take place in StarCraft II: Wings of Liberty and the upcoming StarCraft II: Heart of the Swarm. Featuring never-before-seen glimpses into Jim Raynor and Sarah Kerrigan’s past, this novel opens a window into a world of passion, action, and adventure.

New York Times bestselling and award-winning author Christie Golden has written more than forty novels and several short stories in the fields of science fiction, fantasy, and horror. Among her many projects are over a dozen Star Trek novels and several original fantasy novels. An avid player of World of Warcraft, she has written two manga short stories and several novels in that world. Golden lives in Tennessee. She welcomes visitors to her website: ChristieGolden.com.
Loading...
or
Not Currently Available for Direct Purchase