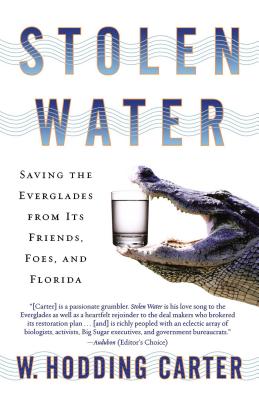 Saving the Everglades from Its Friends, Foes, and Florida

When the Comprehensive Everglades Restoration Plan went into effect during the Clinton administration, Florida's great grassy wilderness garnered a host of national attention -- and has since become a breeding ground for environmental dispute. What does it take to "save" a forest? How can it be preserved?
Enter W. Hodding Carter. For an Outside magazine feature he's agreed to paddle the ninety-nine-mile waterway in Everglades National Park to examine the landscape from all angles -- physical, political, cultural, and very personal -- and get to the rock-bottom heart of the story. Stolen Water is the outgrowth of Carter's journey.
Through investigative research, eyewitness accounts, and interviews with key players in the conservation controversy, Carter offers a rare portrait of a national treasure. Utterly important, and at times downright hilarious, Stolen Water is a classic American adventure tale, and an environmental parable for our time.

Praise For Stolen Water: Saving the Everglades from Its Friends, Foes, and Florida…

"[Carter] is a passionate grumbler. Stolen Water is his love song to the Everglades as well as a heartfelt rejoinder to the deal makers who brokered its restoration plan...[and] is richly peopled with an eclectic array of biologists, activists, Big Sugar executives, and government bureaucrats."
-- Audubon (Editor's Choice)

"Carter [is] a gifted teller of nature tales with a flair for the humorous and off beat....[An] engaging read."
-- Publishers Weekly

"Carter is pissed off and, at the same time, raucously funny -- the perfect combination for a subject so big and miasmal as the Everglades."
-- Hampton Sides, author of Ghost Soldiers and Americana

"Carter writes with breezy, story-telling ease, his voice veering from serious to comic as he blunders through tangles of mangroves on dead-end voyages and sizes up [all] the swampbusting characters."
-- Sun Sentinel (Ft. Lauderdale, FL)

W. Hodding Carter has written for several national magazines, including Esquire, Smithsonian, Newsweek, and Outside. The author of Westward Whoa, A Viking Voyage, and An Illustrated Viking Voyage, he lives with his family in Rockport, Maine.
Loading...
or support indie stores by buying on