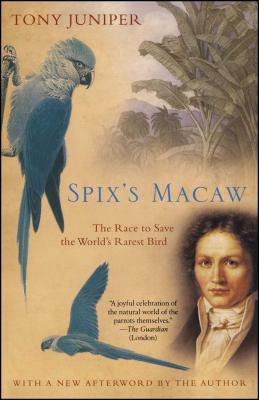 The Race to Save the World's Rarest Bird

The Spix's Macaw, if it survived and recovered, could inspire the world to see what was possiblethrough cooperation and determined efforts to save the earth's natural riches....
On June 3, 1817, Johann Baptist Ritter von Spix set sail for the New World on an expedition sponsored by the Bavarian Royal Academy of Sciences. What he found in Brazil's thorny caatinga woodlands would one day transform our understanding about evolution, survival, and -- in the case of the long-tailed blue parrot now known as "Spix's Macaw" -- extinction.
In this fascinating natural history, esteemed environmentalist Tony Juniper brings the caatinga bird beautifully to life. Not long after Spix's discovery, his parrot -- whose beauty, dexterity, and clear-eyed passion made it a favorite among scientists and bounty hunters alike -- had become more valuable than heroin, and worth thousands of dollars on the black market. By 1990, only one lone male was known to be living in the wild.
Spix's Macaw tells the tale of Juniper's race to save the species, from joining an international rescue operation in the caatinga to calling on private collectors to mate their illegal birds to waiting in vain for a hybrid nest of eggs to hatch. His story brings new meaning to Emily Dickinson's poem "Hope Is the Thing with Feathers."
A heart-stopping homage to the long, lonely flight of the last Spix's Macaw, this is a compassionate addition to the annals of nature literature and an environmental parable for our time.

Praise For Spix's Macaw: The Race to Save the World's Rarest Bird…

The Guardian A joyful celebration of the natural world of the parrots themselves.

BBC Wildlife magazine A triumph of passionate writing, a work of courage and true importance.

The Virginian-Pilot Rich in detail and flawlessly written...[a] compelling...homage to a doomed species.

The Times A heartbreaking but encouraging book; as we were agents of [the Spix's] downfall, so must we be of its salvation.

Tony Juniper is the executive director of Friends of the Earth. The coauthor of Parrots, which was named a Reference Book of the Year by the UK Library Association, he lives in Cambridge, England, and campaigns worldwide on environmental issues.
Loading...
or support indie stores by buying on