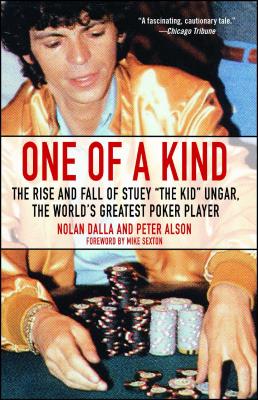 The Rise and Fall of Stuey ',The Kid', Ungar, The World's Greatest Poker Player

Now in paperback comes the first and authorized biography of Stuey Ungar, the greatest card player of all time, who was backed by the Mob in New York before moving to Las Vegas where he won the World Series of Poker three times, then died mysteriously in a seedy motel on the Vegas strip at the age of 45.

He was the Jim Morrison of the casino, a legend before he was of legal age. Stuey Ungar, the son of a Jewish bookie on Manhattan's Lower East Side, dropped out of high school to become an underground card-table sensation, eventually taking out every top gin-rummy player on the East Coast. Bankrolled by the Genovese crime family, Stuey would soon travel around the country in search of new opponents and opportunities—including poker. He would go on to win the World Series of Poker a record three times. And then his luck began to run out.

One of a Kind is the startling tale of a man who won at his game and lost control of his life. Whether tossing away his winnings at the racetrack or on a single roll of the dice, Stuey was notorious for gambling every single dollar in his pocket. Though he had won an estimated $30 million in his lifetime, Stuey had no bank account, not even a home address. He was found dead in a Vegas motel—with $800 in cash on his person, the only money he had left—at the age of forty-five.

An intimate, authorized biography—Nolan Dalla was commissioned by Stuey in 1998 to pen his story, resulting in hundreds of hours of taped interviews and conversations—One of a Kind illuminates the dark genius of one of poker's most memorable figures.

Praise For One of a Kind: The Rise and Fall of Stuey ',The Kid', Ungar, The World's Greatest Poker Player…

"Reader beware the seductive blue flame. To illuminate the triumphant yet scorchingly hideous forty-five years Stuey Ungar spent among us, Dalla and Alson have produced an acetylene torch of a book. There was no other way to write a story like this. One of a Kind is a lesson in no-limit hold'em as well as a terrifying pleasure." -- James McManus, author of Positively Fifth Street

"A standout among this year's bumper crop of poker books." -- New York magazine

Nolan Dalla is the lead sports handicapper for Casino Player and has written for Gambling Times, Card Player, Poker Digest, Poker Pages, Poker Player, and The Intelligent Gambler. He was the head of public relations for Binion's Horseshoe in Las Vegas and is now media director for the World Series of Poker. A native Texan, he currently resides in Las Vegas.

Peter Alson is the author of the highly acclaimed memoir Confessions of an Ivy League Bookie and coauthor of One of a Kind, a biography of the poker champion Stuey Ungar, and Atlas: From the Street to the Ring: A Son's Struggle to Become a Man. Alson's articles have appeared in many national magazines, including Esquire, Playboy, and The New York Times Magazine. He lives in Brooklyn with his wife, Alice, and their daughter Eden.
Loading...
or support indie stores by buying on