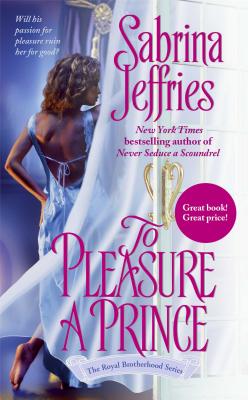 To Pleasure a Prince

Bestselling author Sabrina Jeffries pens the sizzling story of one of three half-noble half brothers, who makes a most unwelcome entrance into society...
and a most unexpected match.

Beautiful Lady Regina Tremaine has turned down so many suitors that she's called La Belle Dame Sans Merci. The truth: she won't marry because she carries a dark secret. She sees no good reason, however, why her brother shouldn't court the lovely Louisa North -- even if the girl's brother, the notorious "Dragon Viscount," objects.
Marcus North, Viscount Draker -- bastard son of the Prince of Wales -- is rumored to be a monster who holds women captive in his dark castle to have his way with them. He has been exiled from polite society for years. But when Lady Regina makes a plea on her brother's behalf, Marcus proposes an outrageous deal: her brother can court Louisa so long as Marcus can court Regina. Can the beauty and the beast survive a proper courtship when the devastatingly improper passion between them threatens to cause the scandal of the century?