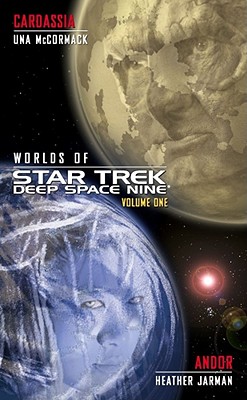 Within every federation and every empire, behind every hero and every villain, there are the worlds that define them. In the aftermath of Unity and in the daring tradition of Spock's World, The Final Reflection, and A Stitch in Time, the civilizations most closely tied to Star Trek: Deep Space Nine can now be experienced as never before...in tales both sweeping and intimate, reflective and prophetic, eerily familiar and utterly alien.

CARDASSIA: The last world ravaged by the Dominion War is also the last on which Miles O'Brien ever imagined building a life. As he joins in the reconstruction of Cardassia's infrastructure, his wife Keiko spearheads the planet's difficult agricultural renewal. But Cardassia's struggle to remake itself—from the fledgling democracy backed by Elim Garak to the people's rediscovery of their own spiritual past—is not without opposition, as the outside efforts to help rebuild its civilization come under attack by those who reject any alien influence.

ANDOR: On the eve of a great celebration of their ancient past, the unusual and mysterious Andorians, a species with four sexes, must decide just how much they are willing to sacrifice in order to ensure their survival. Biological necessity clashes with personal ethics; cultural obligation vies with love—and Ensign Thirishar ch'Thane returns home to the planet he forswore, to face not only the consequences of his choices, but a clandestine plan to alter the very nature of his kind.

Una McCormack is the author of ten previous Star Trek novels: The Lotus Flower (part of The Worlds of Star Trek: Deep Space Nine trilogy), Hollow Men, The Never-Ending Sacrifice, Brinkmanship, The Missing, the New York Times bestseller The Fall: The Crimson Shadow, Enigma Tales, Discovery: The Way to the Stars, the acclaimed USA Today bestseller Picard: The Last Best Hope, and Discovery: Wonderlands. She is also the author of five Doctor Who novels from BBC Books: The King’s Dragon, The Way Through the Woods, Royal Blood, Molten Heart, and All Flesh is Grass. She has written numerous short stories and audio dramas. She lives with her family in Cambridge, England.

Heather Jarman lives in Portland, Oregon, where she supplements her day job as a tired mommy with her writing career. Her most recent contributions to the Star Trek fiction include "The Officers' Club," the Kira Nerys story in Tales from the Captain's Table, and Paradigm, the Andor novel in Worlds of Star Trek: Deep Space Nine, Volume One.

By night Heather flies to distant lands on black ops missions for the government, where she frequently breaks open industrial-strength cans of whupass on evildoers.
Loading...
or
Not Currently Available for Direct Purchase