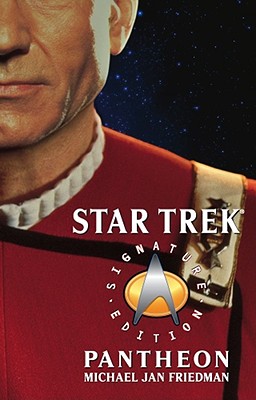 From Earth to the edge of our galaxy and beyond, from the early days of warp flight to the latter half of the twenty-fourth century, humankind and its alien partners in the Federation have looked to their heroes to expand the limits of their knowledge. And as each generation's pantheon of heroes has passed on into legend, a new generation has risen to take its place.

Over the years, Fate has woven the voyages of these three vessels into a vivid skein of treachery and sacrifice, hardship and determination, tragedy and courage—each step of the way demonstrating the immeasurable worth of the flawed but farseeing heroes who commanded them.

Michael Jan Friedman is the author of nearly sixty books of fiction and nonfiction, more than half of which bear the name Star Trek or some variation thereof. Ten of his titles have appeared on the New York Times bestseller list. He has also written for network and cable television, radio, and comic books, the Star Trek: Voyager® episode “Resistance” prominent among his credits. On those rare occasions when he visits the real world, Friedman lives on Long Island with his wife and two sons.
or support indie stores by buying on
Copyright © 2020 American Booksellers Association