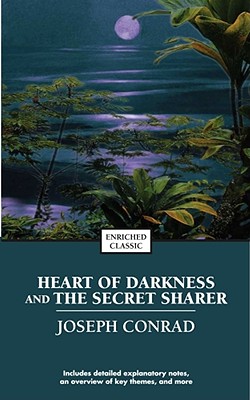 Heart of Darkness and the Secret Sharer (Enriched Classics)

Two of Joseph Conrad's most compelling and haunting works, in which the deepest perceptions and desires of the human heart and mind are explored.

The finest of all Conrad's tales, Heart of Darkness is set in an atmosphere of mystery and menace, and tells of Marlow's perilous journey up the Congo River to relieve his employer's agent, the renowned and formidable Mr. Kurtz. What he sees on his journey, and his eventual encounter with Kurtz, horrify and perplex him. Ultimately, Conrad calls into question the very bases of civilization, human nature, and imperialism. The Secret Sharer is the saga of a young, inexperienced skipper forced to decide the fate of a fugitive sailor who killed a man in self-defense. As he faces his first moral test the skipper discovers a terrifying truth—and comes face to face with the secret itself.

Heart Of Darkness and The Secret Sharer draw on actual events and people that Conrad met or heard about during his many far-flung travels. In portraying men whose incredible journeys on land and at sea are also symbolic voyages into their own mysterious depths, these two masterful works give credence to Conrad's acclaim as a major psychological writer.

This edition includes:
-A concise introduction that gives readers important background information
-A chronology of the author's life and work
-A timeline of significant events that provides the book's historical context
-An outline of key themes and plot points to help readers form their own interpretations
-Detailed explanatory notes
-Critical analysis, including contemporary and modern perspectives on the work
-Discussion questions to promote lively classroom and book group interaction
-A list of recommended related books and films to broaden the reader's experience

Joseph Conrad (1857-1924) was born in Ukraine. In 1861 his family was exiled to Northern Russia because of his father's political activities. Then in 1969, both of Conrad's parents died of tuberculosis, so he moved to Switzerland to live with his uncle. Conrad attended school in Kraków, but he dreamed of the sea, and in the 1870s he joined the French merchant marines. While working on a ship, Conrad made voyages to the West Indies and was even involved in arms smuggling. Eventually Conrad joined the British merchant navy and swiftly climbed the ranks. By 1886 he was commanding his own ship and was given British citizenship. It was at this time that he officially changed his name to Joseph Conrad. In 1894, at the age of 36, Conrad finally left the sea behind him, settled down in England, and began to write his famous stories.
Loading...
or
Not Currently Available for Direct Purchase