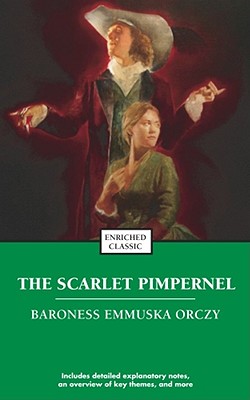 This timeless novel of intrigue and romance is the adventure of one man's defiance in the face of authority. The rulers of the French Revolution are unable to discern the identity of the Scarlet Pimpernel, a man whose exploits are an embarrassment to the new regime. Is he an exiled French nobleman or an English lord? The only thing for certain is his calling card—the blood-red flower known as the Scarlet Pimpernel. The novel tells of the mysterious and much spoken-of League of the Scarlet Pimpernel. This group is led by the cunning and noble Sir Percy Blakeney who, with accomplices, risks life and limb rescuing the innocents caught up in the Reign of Terror in Paris. His disguises and other inventive ways of eluding capture stretch to his anonymity even amongst the English. The Scarlet Pimpernel is by far the best known not only of Orczy's works, but also of stories set during the French Revolution.

This edition includes:
-A concise introduction that gives readers important background information
-A chronology of the author's life and work
-A timeline of significant events that provides the book's historical context
-An outline of key themes and plot points to help readers form their own interpretations
-Detailed explanatory notes
-Critical analysis, including contemporary and modern perspectives on the work
-Discussion questions to promote lively classroom and book group interaction
-A list of recommended related books and films to broaden the reader's experience

Baroness Emmuska Orczy (1865-1947) was Hungarian-born royalty but lived most of her life in London. Baron Felix Orczy, a noted composer and conductor, was her father. She received a convent education in Paris and Brussels and moved with her family to London, where she studied Art and met her future husband - Montague Barstow - who she would marry in 1894 and collaborate with on the theatrical original of "The Scarlet Pimpernel" in 1903. Her lack of success in the artistic field led her to start writing and found it surprisingly easy to get her early crime stories published. Orczy and Barstow moved to Monte Carlo, where the latter died in 1943, leaving his wife to write her autobiography, which was published a matter of weeks before her death.
Loading...
or
Not Currently Available for Direct Purchase