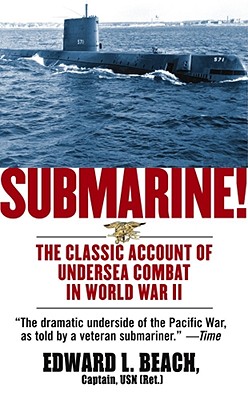 The war beneath the waves.

For the World War II submariner, every day was a life-or-death trial: going to sea for months at a time; existing in dank, claustrophobic conditions; enduring long stretches of monotonous silence punctuated by adrenaline-spiked episodes of paralyzing fear and victorious elation. It was a duty few men could handle—and even fewer would survive.

This is the true story of those brave men who served and too often died under the ocean surface, written by a man who was there. Edward L. Beach masterfully weaves his gripping experiences aboard the USS Trigger with those of other boats fighting the war in the Pacific. Part action-packed combat chronicle, part testament to the courageous sacrifices made by those who never came back, this is a compelling eyewitness account of the war as few have seen it.

Edward L. Beach, Captain, USN (Ret.), was the bestselling author of Run Silent, Run Deep and a dozen other books about the navy, including Around the World Submerged -- a chronicle of his record-breaking 1960 circumnavigation of the globe in the USS Triton. He died in 2002.

The Philadelphia Inquirer A genuine World War II thriller....A firsthand account of a lot of guys with a lot of nerve who shortened the war by taking tremendous gambles.

Time The dramatic underside of the Pacific War, as told by a veteran submariner.
or support indie stores by buying on
Copyright © 2020 American Booksellers Association