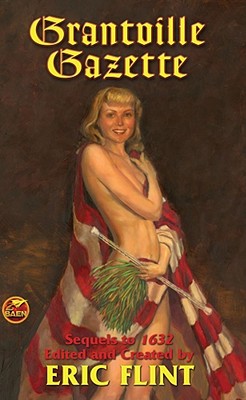 Grantville Gazette (The Ring of Fire)

Grantville, formerly in West Virginia in the 20th century, now in Germany in the 17th century, is the most unusual town in the world-and probably in any century. The mysterious cosmic phenomena which the former West Virginians call the "Ring of Fire" hurled the town back through time into the middle of the Thirty Years War. In spite of their advanced technology, the men and women of Grantville are greatly outnumbered and must deal carefully with the squabbling local tyrants-but they have no shortage of American courage and ingenuity. Eric Flint, a bright new star of science fiction and creator of the Ring of Fire universe, now presents a book of new fiction about the heroes of Grantville, as well as articles examining the problems of maintaining 20th century technology in the 17th century. (Can you make penicillin from bread mold? To conserve your limited supply of gasoline, can you use literal horsepower to run a dynamo? Can you make a radio using 17th century glassware and metallurgy?) The Grantville Gazette is a fascinating exercise in alternate history and imagination and will be a must-buy for everyone who read 1632 and 1633.