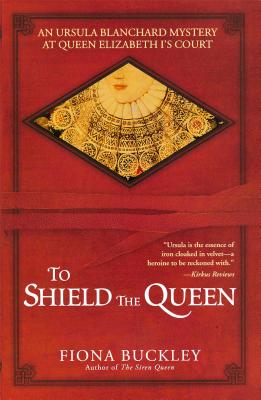 To Shield the Queen

Rumor has linked Queen Elizabeth I to her Master of Horse, Robin Dudley. And what rumors, at that: but for his ailing wife, Amy, Dudley would wed her majesty, the gossipmongers are whispering. To quell idle tongues, Elizabeth dispatches Ursula Blanchard to tend to the sick woman's needs. But not even Ursula can prevent the "accident" that takes Amy's life. Did she fall or was she pushed? Was Ursula a pawn of Dudley and the Queen?

Suddenly Ursula finds herself at the center of the scandal, trying to protect Elizabeth as she loses her heart to a Frenchman who may be flirting with sedition against her Queen. She can trust no one, neither her lover nor her monarch, as she sets out to find the truth in a glittering court that conceasls a wellspring of blood and lies.

Praise For To Shield the Queen…

"Ursula is the essence of iron cloaked in velvet -- a heroine to be reckoned with." -- Kirkus Reviews

Fiona Buckley introduces steely-nerved handmaiden Ursula Blanchard in this first thrilling adventure in a "sixteenth-century mystery series as complicated and charming as an Elizabethan knot garden." -- The Tampa Tribune

Fiona Buckley is the author of eight historical mystery novels featuring Ursula Blanchard: To Shield the Queen, The Doublet Affair, Queen's Ransom, To Ruin a Queen, Queen of Ambition, A Pawn for a Queen, The Fugitive Queen, and The Siren Queen. She lives in North Surrey, England.
Loading...
or support indie stores by buying on