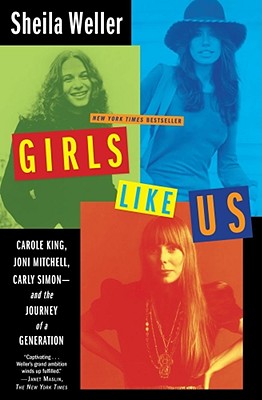 “Sheila Weller's story of three of the most important women in the history of pop music - Carole King, Joni Mitchell, and Carly Simon - captures the 60s better than any novel, recalling the stories and songs that have become ingrained in the psyche of America's soul. I would rate this book a 98 - it has a great beat and you can dance to it.”
— Jerry Brown, The Bookstore, Radcliff, KY
View the List

A groundbreaking and irresistible biography of three of America's most important musical artists -- Carole King, Joni Mitchell, and Carly Simon -- charts their lives as women at a magical moment in time.

Carole King, Joni Mitchell, and Carly Simon remain among the most enduring and important women in popular music. Each woman is distinct. Carole King is the product of outer-borough, middle-class New York City; Joni Mitchell is a granddaughter of Canadian farmers; and Carly Simon is a child of the Manhattan intellectual upper crust. They collectively represent, in their lives and their songs, a great swath of American girls who came of age in the late 1960s. Their stories trace the arc of the now mythic sixties generation -- female version -- but in a bracingly specific and deeply recalled way, far from cliché. The history of the women of that generation has never been written -- until now, through their resonant lives and emblematic songs.

Filled with the voices of many dozens of these women's intimates, who are speaking in these pages for the first time, this alternating biography reads like a novel -- except it's all true, and the heroines are famous and beloved. Sheila Weller captures the character of each woman and gives a balanced portrayal enriched by a wealth of new information.

Girls Like Us is an epic treatment of midcentury women who dared to break tradition and become what none had been before them -- confessors in song, rock superstars, and adventurers of heart and soul.

Sheila Weller is a New York Times bestselling author and award-winning magazine journalist. She is the author of five previous books, most recently her 2003 family memoir, Dancing at Ciro's, which The Washington Post called "a substantial contribution to American social history." She is the senior contributing editor at Glamour, a contributor to Vanity Fair, and a former contributing editor of New York. To learn more, visit www.girlslikeusthebook.com.

Praise For Girls Like Us: Carole King, Joni Mitchell, Carly Simon--And the Journey of a Generation…

"Let's get one thing clear right from the start -- this is a fabulous book...Girls like Us unfolds with drama and panoramic detail. Written with a keen journalistic and, more importantly, female eye, [it] works as a healthy, long overdue counterweight to the endlessly repeated, male-sided version of rock 'n roll. Before these women broke the cultural sod during the rock 'n roll years, there were no girls like us. Now there are millions." -- Caitlin Moran, London Sunday Times

"Even at 500-plus pages, the book goes down as easy as a Grisham yarn on a vacation flight... The only flaw to Girls Like Us is that it comes to an end. Few people lead lives as action-packed and spiritually opulent as Carole King, Joni Mitchell and Carly Simon did during such intensely interesting times. And few writers are able to impart so much freight with such vigor. The towering triumvirate got what it deserves." -- The Toronto Sun

"A page-turner of the first order....a must read." -- The Boston Globe

"As an avid music reader, sometime reviewer, and teen of the '60s myself, I was sure I knew just about everything there was to know about Carole, Joni, and Carly.... But Girls Like Us, an ambitious collective biography by six-time author and magazine journalist Sheila Weller, showed me exactly how much I didn't know. This absorbing, well-reported book chronicles a time when women in all walks of life were exercising new-found freedom. And as icons of that era, nobody did it better." -- Christian Science Monitor

"Both scholarly and dishy. A superb journalist, Weller has managed to uncover a trove of unreported facts on her subjects." -- People **** (Pick of the Week)

"When we were little, and someone said, `I love chocolate pudding," there was always some nutball who'd ask, "Do you want to marry it?' Well, I love Sheila Weller's Girls Like Us so much that I would marry it. This lush, beautifully-researched and lyrically written biography of the three women whose music was emblematic of the generation who pioneered the way for me and so many others is literate, bold, charming and ... cuddly....[E]very page brought a fresh surprise. Weller raised the bar for this book above even a classy celebrity bio... This book probably gave me more pure enjoyment than any but a handful I've read in years. If you're passionate about music -- and about passion -- you'll have to hand it to Sheila Weller for a bravura composition of her own." --Jacquelyn Mitchard the bestselling author of Still Summer, Cage of Stars, and the first Oprah Book Club selection, The Deep End of the Ocean, on WritersAsReaders.com

"Incisive, painstakingly researched...Any woman who grew up during the late 1960s and '70s will fall head over heels for Sheila Weller's Girls Like Us." -- Ladies Home Journal

"A sharp-eyed vision of the worlds which nourished these ambitious, determined and singular artists...Weller digs deep into [Joni Mitchell's] complex psychology and provides as close to an understanding of this difficult figure as anyone is likely to ever offer. An unfailingly entertaining read...a riveting story." -- Mojo

"Juicy... I doubt I'll listen to Mitchell's songs again without considering the child she gave up for adoption... and her subsequent bouts with depression or hear the oft-married King's music without thinking of her tumultuous relationships. As for Simon, Weller captures fully both the richness and glamour of her romantic life and the profound sensitivity that made her especially vulnerable to ex-husband James Taylor's drug abuse and the cavalier charm of Warren Beatty." - USA Today
or
Not Currently Available for Direct Purchase
Copyright © 2020 American Booksellers Association