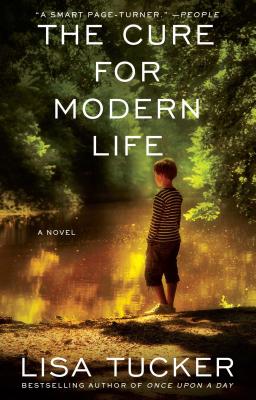 From Lisa Tucker, the critically acclaimed author of Once Upon a Day and The Song Reader, comes an extraordinary novel about the way we live now: the choices we make and the decisions we let life make for us.

Matthew and Amelia were once in love and planning to raise a family together, but a decade later, they have become professional enemies. To Amelia, who has dedicated her life to medical ethics, Matthew's job as a high-powered pharmaceutical executive has turned him into a heartless person who doesn't care about anything but money. Now they're kept in balance only by Matthew's best and oldest friend, Ben, a rising science superstar -- and Amelia's new boyfriend.

That balance begins to crumble one night when, coming home to his upscale Philadelphia loft, Matthew finds himself on a desolate bridge face-to-face with a boy screaming for help. Homeless for most of his life, ten-year-old Danny is as streetwise as he is world-weary, and his desperation to save his three-year- old sister means he will do whatever it takes to get Matthew's help. What follows is an escalating game of one-upmanship between Matthew, Amelia, and Danny, as all three players struggle to defend what is most important to them -- and are ultimately forced to reconsider what they truly want.

Dazzlingly written with a riveting story that will resonate with readers everywhere, Lisa Tucker's The Cure for Modern Life is a smart, humorous, big-hearted novel about what it means in the twenty-first century to be responsible, to care about other people, and to do the right thing.

Praise For The Cure for Modern Life: A Novel…

"An enjoyable literary page-turner that also explores serious social issues. In crisp, lively prose, Tucker cleverly executes a series of surprising twists that, coupled with the Big Pharma backdrop and cinematic feel, make the novel as fast-paced as a thriller, but with astute and often humorous observations about the shifting morality of 21st-century America. An excellent choice for book clubs...solidifies her position as a gifted writer with a wide range and a profound sense of compassion for the mysteries of the human heart." -- Publishers Weekly (starred review)

"A touching and very modern relationship story with some compelling social issues...This fast-paced, funny, and smart novel is a sure bet for book clubs." -- Booklist

"The Cure for Modern Life is so inviting because it's about people we all know, or at least think we knowÉTucker deftly forces us to ponder what we'd do in this exploration of the complexity of human nature and our relationships with one another." -- The Salt Lake Tribune

"Tucker's book works because she knows how to limn characters, tell a story economically, and propel it at just the right allegro-vivace tempo." -- The Philadelphia Inquirer

"Lisa Tucker, once again, brings a fresh view to the intricacies of relationships in "The Cure for Modern Life"...Tucker continues to grow as a writer, and "The Cure for Modern Life" gives readers some ethical questions to ponder. It's an approach that has long been Jodi Picoult territory, but Tucker comes at it from a different direction. The questions aren't the source of the plot, but they drive the relationships among central characters. It's a structure that should make the novel attractive to book groups who've enjoyed Picoult's work." -- The Denver Post

Lisa Tucker is the bestselling author of The Promised World, The Cure for Modern Life, Once Upon a Day, Shout Down the Moon and The Song Reader. Her short work has appeared in Seventeen, Pages and The Oxford American. She lives in Pennsylvania with her family.
Loading...
or support indie stores by buying on